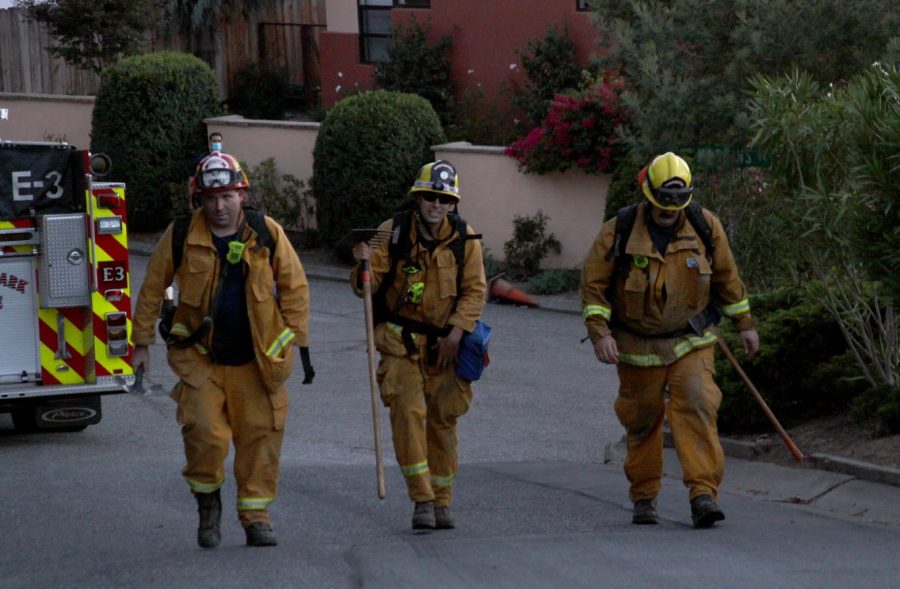 On Monday afternoon, the Cipriani neighborhood was crowded with emergency personnel.

As record-setting wildfires burn across the state, a brush fire broke out in the San Juan Canyon in Belmont, causing evacuations in the nearby community.

The first report of the fire was called in at 3:44 pm, Monday afternoon, crews arriving within six minutes, noticing the fire climbing up the hills in the canyon.

“We were fortunate because we called a lot of resources. Over 90 firefighters responded. The fire was four alarms and had a Cal Fire response,” said Joe Novelli, Battalion Chief of San Mateo Consolidated Fire Department.

The fire was “knocked out” within about 90 minutes, though firefighters stayed until Tuesday morning to monitor the perimeter of the canyon.

— CA Fire Scanner (@CAFireScanner) September 21, 2020
“The location of this fire was something we’ve been preparing for years. There’s a bunch of different locations you’ve seen all across the state, and the city of Belmont is no different, so we went aggressive with the fire attack,” Novelli said.

Nobody was hurt in the fire, though two homes were damaged. According to Novelli, the deck was damaged on one house, and the other had damages to a wall and about 60 feet of fencing. The fire spread just over two acres.

According to San Mateo County Emergency Services, about 40 homes were evacuated, but other locals prepared to evacuate.

“Once information got shared on social media, a lot of folks decided to err on the side of caution,” said Brian Vogel, a corporal with the Belmont Police Department.

In order to assist with evacuations, cell phone alerts were sent out, and members of the Belmont Police Department went door-to-door, informing residents of the evacuation order. The San Mateo County Sheriff’s Department was also involved, and the California Highway Patrol helped to block off roads for emergency vehicle access.

“[Evacuations] are very intense, but people were cooperative,” Vogel said. “It’s something that we’ve trained on and practiced, and we were ready.”

A challenge was the narrow roads leading to the fire, causing a lot of traffic, so the California Highway Patrol assisted with road closures and monitoring cars.

“It was nice to have other agencies come do road closures so our officers, who are driving the streets every day and are familiar with the different hundred blocks, could get out and contact residents,” Vogel said.

The grass fire was ranked at “four alarms.” The alarm system is a way of categorizing what equipment is needed at the site of the fire, changing with weather conditions and type of fire. Specifically, vegetation fires will get bigger if it is hot, dry, and windy.

“Alarms are packages of resources that [the fire department] sends. Those different packages include engines, a lot of trucks, battalion chiefs, and aircrafts,” said Anthony Agresti, the San Mateo Consolidated Fire Department captain.

The evacuation order was lifted at 9 pm, allowing residents to sleep in their own homes. However, due to road conditions, officers expected locals would have to walk back amidst traffic from fire engines.

“[This] has never happened before, so it was really scary,” said Kendall Grinker, a sophomore whose family had been evacuated. “I packed a small bag of things that I felt important, like electronics.”

Though living in California means dealing with yearly wildfires, they are rare enough in the Bay Area that many residents were caught off guard.

“I wasn’t organized,” said John Grant, a Cipriani neighborhood resident. “I know I should be. My heart started beating, and the adrenaline was pumping. I was kind of down on myself because I knew that I should have a go-bag and be prepared for a situation like this, but I was so optimistic that it’s not going to happen to us.”

“I think [the emergency crews] did an amazing job,” said Belmont local Amy Mehdizadeh. “Communication was great […] everybody was really supportive and came out to help all their friends and neighbors. I think that’s a good thing about living in Belmont.”