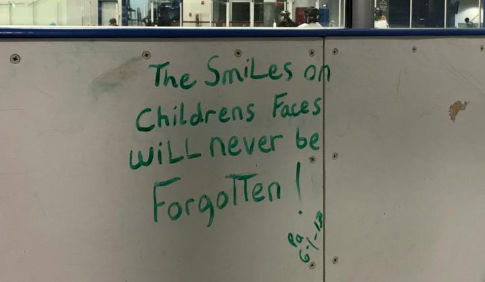 This is a statement from an unknown source about the great times at the rink before it closed.

On Sept. 18, the Bridgepointe committee fight for the reopening of their ice rink had prevailed. The Redwood city ice rink, run by the Nazareth ice oasis group, was able to obtain ownership of the San Mateo rink and was reopened under the name “Nazareth Ice Oasis San Mateo.”

The committee for the reopening of the rink had been fighting to reopen the rink ever since the rink was closed in mid-2013. Many were devastated that the place they considered their home would be gone. Many local hockey players and figure skaters were affected as the Redwood city rink had been unknown at the time and seldom used.

“At first I didn’t believe it. I thought it was a tactic to gain attention and that it didn’t really mean anything. But when I found out it was real, I was ecstatic. I never really imagined the rink reopening at all,” said Jeremy Verba, a member of the committee who worked to reopen the rink.

The rink had initially closed in the middle of 2013 due to their lease ending and the Bridgepointe mall not allowing the owner renew the previous lease. This forced everyone who wished to continue skating to move the Redwood city ice rink which was out of the way for many, but their passion for skating blew through the hardship.

Years later, in 2017, news that the rink would reopen, managed by the Narazeth Redwood city ice rink, emerged.

Now, many teams practice at the rink and the rink is used daily by many. There are also many new opportunities since there is another sheet of ice in a very close vicinity. Even just a few weeks after the rink reopened, the schedule is packed topped to bottom with activities for all ages.

One aspect that is now possible is the ability to hold ice hockey tournaments. For a hockey tournament to be held at a location, there must be two sheets of ice readily available which is now the case for Nazareth Ice Oasis group.

For Carlmont students and other locals, this means another place to skate with friends. For a few students, it even means a new rink to play and practice hockey and figure skating. For students and adults outside of Carlmont, especially in the San Mateo area, it brings a new place to skate without a hefty drive through traffic.

“It felt like a victory and it showed that all our protests had worked. When I got on the ice for our first practice there, I took three victory laps out of sheer excitement that we had won,” said Jeremy Verba’s son Nathan Verba, who plays hockey multiple times a week at the Bridgepointe rink since its reopening. “I got really excited when I had first smelled the rink because the smell had brought back so many memories for me.”

Now, the management at both Ice Oasis rinks says they plan to keep both rinks open for as long as possible.

“There were times that I felt like giving up. At points, almost no one was on our side, not the city, not anyone except the committee and the players. Sometimes, it felt like we were wasting our time trying to reopen this rink,” said Jeremy Verba.