Bring Change to Mind changes the conversation about mental health 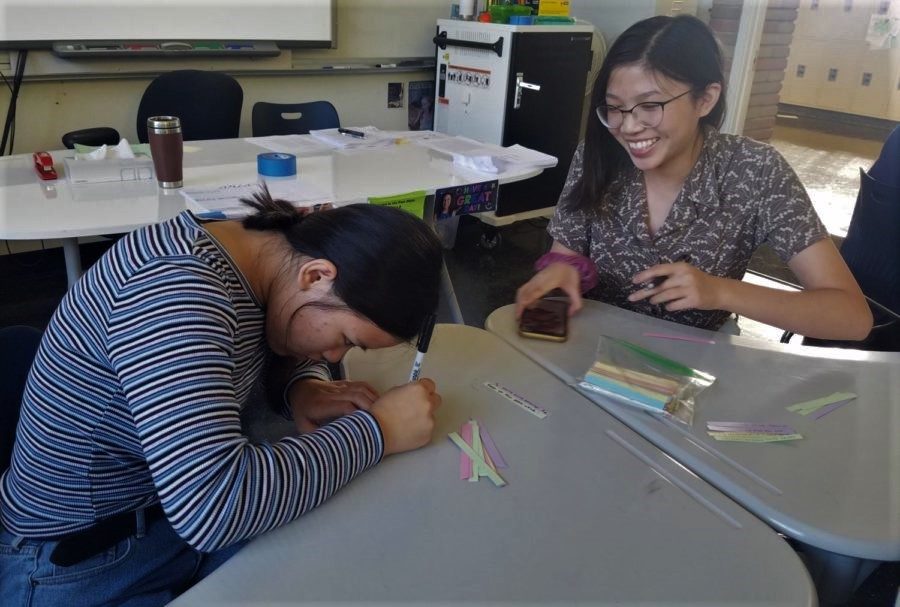 Emma Lee, vice president of Bring Change to Mind, and Mackenzi Rauls, president of the club, work on their most recent project "Jars of Positivity". "We want people to have some positive affirmation throughout the day. Writing all kinds of positive message would help with that but it would also make our presence more known on campus," Lee said.

With an increase in academic pressure, more and more student organizations are focusing on mental health issues.

Carlmont students have combated these issues by establishing student-led clubs that focus on educating teens about mental health issues and promoting healthy habits.

Bring Change to Mind (BC2M) is a California-based organization that aims to remove the stigma behind mental illness by opening a conversation about mental health. The majority of their activism is done through student-led high school clubs in the Bay Area.

“BC2M organized a summit with all the associated schools in the Bay Area,” Lee said. “We had a lot of fun just talking to other local clubs, sharing ideas, and learning new things about mental health and how to potentially improve our message.”

Not only does Calrmont’s BC2M spread awareness about mental health, but the club also creates a positive atmosphere for the students.

“My favorite things about this club are the activities and the general atmosphere of it,” said Cindy Chen, a senior. “The club has a very warm and welcoming atmosphere that invites all the students in and further allows us to promote positivity surrounding the field of mental health.”

The club works to contribute to the Carlmont’s student body by focusing on promoting positive messages to reduce the overall existing stress.

“We work on different projects such as ‘Jars of Positivity’ to remind people about taking the time to focus on their own mental health,” said Olga Pyalling, a senior. “I think that sometimes people do not have the time to talk about mental health, and not everyone thinks it to be as important as it actually is.”

In addition to promoting a positive message around campus, the club also allows its individual members to take some time to relax during the busy school hours.

“I come to every meeting of the club to take some time out my school day to work on fun projects and to learn more about mental health,” said Lila Frieden, a freshman. “The positive atmosphere of this club helps me to relax and socialize with people a bit.”

Bring Change to Mind focuses on bringing a message of positivity to Carlmont’s campus in its efforts to remove the stigma around mental illnesses and promote general education on mental health.

“I think that it is important to talk about mental health issues, especially because they are so prevalent in teens today,” Chen said. “Bring Change to Mind does a great job of spreading a message about the overall importance of mental health and making it a more ‘talkable’ topic on campus.”