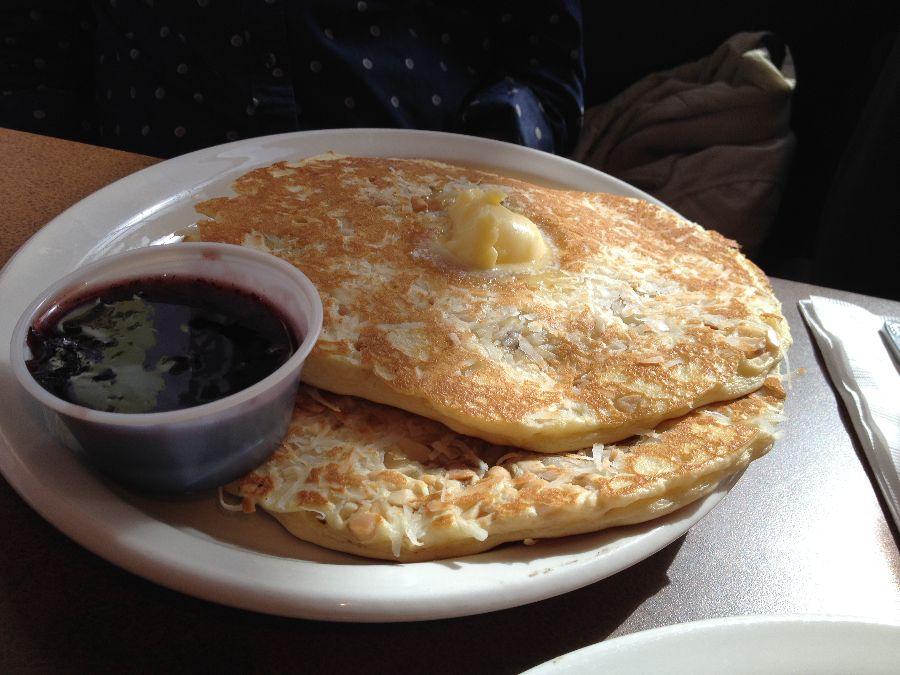 Breakers has the best pancakes in the bay area!

Tired of run-of-the-mill pancakes,and flaky hash browns? Look no further, because Breakers serves the exact opposite. This Mom and Pop restaurant is located in Pacifica, next to the rolling waves.

The breakfast burrito was a pass. The burritos at Chipotle are  much more flavorful and come at a better price. Even after dunking the burrito in salsa and cream cheese, it just tasted wet and soggy. For an extra dollar, one may chose to get avocados as an add-on, which did not help the flavor factor at all. Instead, this was the culprit of the burrito’s pastiness and blandness.

The hot chocolate for $2.25 a cup was not worth its price. It was too sweet, so much so that it would itch and burn the back of my throat. In terms of money and quality, Safeway’s hot chocolate would be a much better deal.

Pancakes are often an understated breakfast item. Too many restaurants and diners try to pass anything circular with whipped cream on top as pancakes, but the chefs at Breakers bring pancakes to a whole new level.

Their pancakes had flavour, and were not watered down with syrup or whipped cream. For example, the coconut walnut pancake had coconut shavings and small little bits of walnuts mixed inside of it. It was not overly sweet, and it had a bit of honey aftertaste.

The hash browns served with the omelets were also great. Using real shavings of potato, the chefs battered and fried them to create crispy perfection. With a little bit of ketchup on top and a hearty appetite, the hash browns will be devoured in seconds.

The omelet was equally delicious, with cheesy perfection between each golden layer of egg. Small chunks of ham were spread throughout the omelet, giving it a slight sweet and salty flavor.

The service was great. The restaurant offered free coffee in the front for customers to enjoy while waiting for a table. The waiters were pleasant and patiently took down orders.

The owner waved at all his customers and greeted them at their table, striking a bit of small talk. After eating, customers must take a stroll by the calming waves of Pacifica. The view is fantastic!