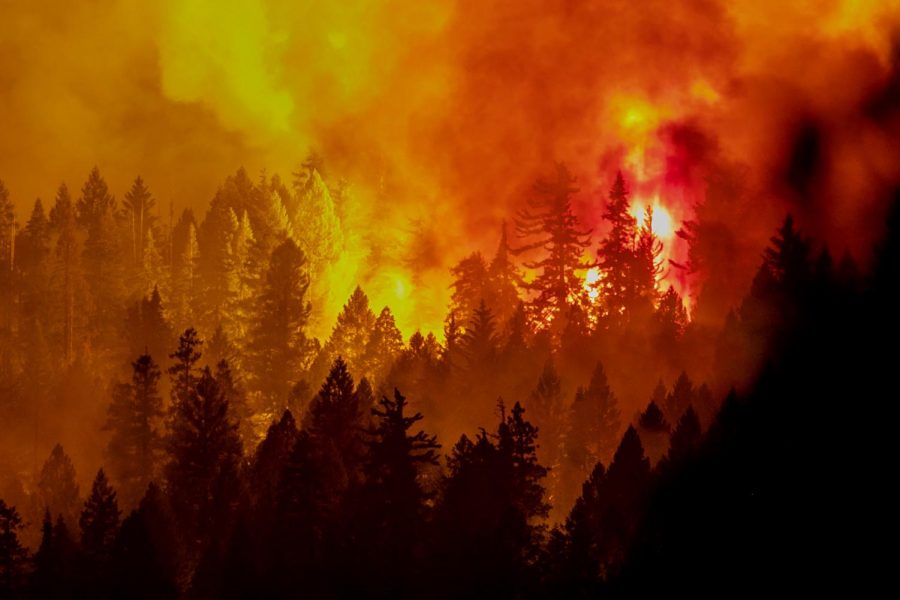 The Caldor Fire has caused many evacuations as residents lives are threatened.

Ashes engulfed the sky as day quickly turned to night. What was once a popular tourist destination, filled with business and people, is now in a state of turmoil.

On Aug. 14, what started as a small fire quickly surged in size as high winds caused flames to spread through the El Dorado, Alpine, and Amador counties. The Caldor Fire prompted several evacuations and warnings, as over 219,000 acres of land and more than 1,000 structures were set ablaze. As a result, over 40,000 residents were forced to evacuate and seek shelter along the Stateline. According to Cal Fire, as of Sunday, the massive fire has also already injured 16 people, 14 of which were firefighters.

In addition to its effects on Tahoe residents, the fire also poses a severe threat to Lake Tahoe’s ecosystem, mainly including its waters, which have been polluted with fallen ashes and smoke. Right now, the lake is covered with a thick layer of soot. This soot has lowered the amount of sunlight that reaches the water and, consequently, the ecosystem’s productivity. The Caldor Fire has also caused Lake Tahoe’s air to become polluted.

Despite the tragic effects of the fire, some improvements have been made. In the last 29 days, 67% of the fire has been contained, and the air quality has become far healthier. When the fire first erupted, air quality records were broken, and AQI levels averaged 251. Now, levels have decreased to a moderate level of 94. In addition, Lake Tahoe residents have finally begun to return after spending the last month in hotels and evacuation centers.

As for Bay Area residents, reactions to the fire are mixed. Some are grateful that nothing detrimental happened to them as a result of the fire. For example, current Carlmont junior Kailani Firenze and her family own a cabin in Lake Tahoe. Although initially the fire stirred up much concern for them, such worries were relieved when their residence was saved. The same goes for Robert Henderson, a Bay Area resident who owns property near the Homewood Mountain Resort.

“Luckily for me, the fire never got too close [to my house.] My house is roughly ten miles away, and as the winds shifted, a lot of homes were saved,” Henderson said.

Others, however, are frustrated with the fire’s effects on their daily lifestyles. For Carlmont athletes eager to play at the collegiate level, such as Kyle Chan, a junior, and Aidan Dimick, a senior, poor air quality from the fire has caused valuable practices to get canceled.

“It sucks cause I love being out there with my teammates and coaches, competing each week. Soccer has been a massive paPreview Changes (opens in a new tab)rt of my life, and I want to continue playing it in the future. To lose practices and even games because of a fire over 200 miles away is frustrating,” Chan said.

In a report to FOX40, Cal Fire added that if conditions are not improved, Californians should expect more fires in the upcoming months. However, such warnings are nothing out of the ordinary, especially in Northern California.

“To be honest, I won’t be surprised if there are more fires this year because it’s been like that in California for so long. I’m used to the sky being smoky, used to having bad air quality,” Dimick said.

Sadly, as we’ve seen time and time again, California continues to have extreme wildfires, and we continue to experience its effects.