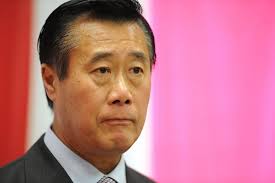 State Sen. Leland Yee was arrested Wednesday after authorities said he solicited money from undercover FBI agents for his current campaign to be Secretary of State.

Yee was charged in U.S. District Court with conspiracy to traffic in firearms without a license and to illegally import firearms, as well as with participating in a scheme to defraud citizens of honest services. Each corruption count is punishable by up to 20 years in federal prison and a fine of up to $250,000, while the gun-trafficking count is punishable by up to five years and $250,000.

San Francisco Mayor Ed Lee said, “What flashes in my mind is he’s dedicated to public service, and I hate seeing this situation occur.”

Yee is also accused of accepting $10,000 in January 2013 from an undercover agent in exchange for his making a call to the California Department of Public Health in support of a contract under consideration with the agency.

Sophomore Kayla Fong said, “I was really surprised that he [Yee] got arrested because he is a state senator and should know how to act. I just wouldn’t expect this crime to come from him.”

The allegations against Yee were outlined in an FBI affidavit in support of a criminal complaint against him and 25 other people.

Also named in the affidavit is Raymond Chow. Chow, who is also known as “Shrimp Boy,” was the former leader of a Chinese criminal organization with ties to Hong Kong. Chow is accused of money laundering, conspiracy to receive and transport stolen property and conspiracy to traffic contraband cigarettes.

Chow and Yee were arrested earlier in the day during a series of raids by the FBI. The agents searched Yee’s office in Sacramento and his home in San Francisco’s Sunset District, where the FBI agents seized roughly two dozen desktop computers, envelops and boxes wrapped in red evidence tape.

Sophomore Thomas Chin said, “I think it was really wrong for him [Yee] to do this because he probably would have gotten caught anyways. Now his reputation and chance for a high government position is ruined.”