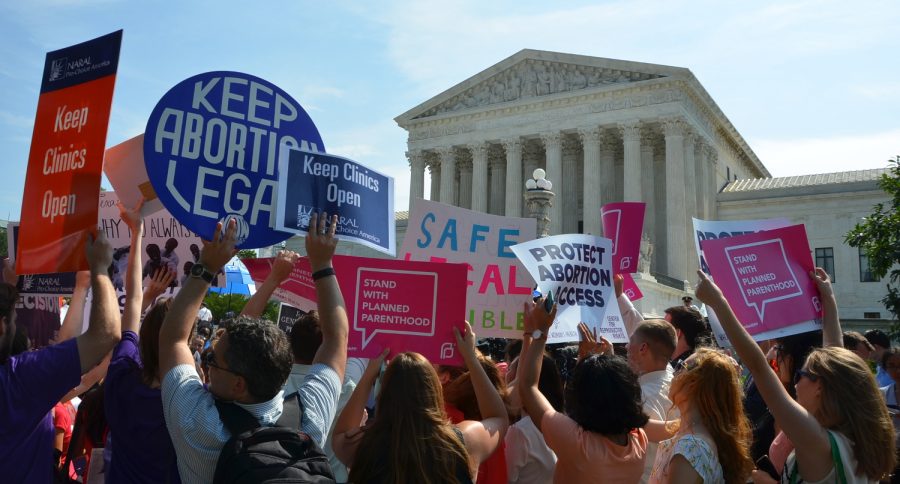 As many around the country are concerned about the likely overturning of Roe v. Wade and increasingly restrictive abortion laws in states, junior Luiza Nunes wants to make sure people continue to protest. “Those who have been organizing for abortion rights saw this coming. It’s almost inevitable, and it’s something that we have to keep fighting for,” Nunes said.

In response to the unclear fate of Roe v. Wade and strict abortion restrictions popping up around the country, California prepares to aid those seeking out-of-state abortion care in areas where abortion could become inaccessible.

On May 2, POLITICO leaked the draft opinion of the Supreme Court’s decision on Dobbs v. Jackson’s Women’s Health Organization. Their ruling in that draft stated that they would overturn Roe v. Wade, making abortion legality left up to the states. The Supreme Court will not make the official decision to determine the fate of Roe v. Wade until June.

The announcement of the likely overturning of this landmark case has angered and concerned many, as this decision can affect many people’s rights to body autonomy.

“It’s my own body. I feel like it’s my body, my choice, so people having the chance to choose is the most important thing,” said Elena Eng, a junior. “They’re not listening to what people want [and] they shouldn’t have a choice over other people’s lives. That’s not their place.”

Many states have already enacted laws that made abortion harder to obtain, with Texas and Oklahoma passing laws stating that doctors cannot perform abortions after six weeks of pregnancy.

Additionally, according to the Guttmacher Institute, 13 states have passed what is known as trigger laws, which are laws to ban or severely restrict abortions that would go into effect if Roe v. Wade got overturned.

With these abortion restrictions and the threat of more to come, there will likely be an increase of people traveling out of state for abortion to states that would continue to protect access to safe abortion care, like Colorado, New Mexico, and California.

One organization working to provide abortion access is ACCESS Reproductive Justice. This Oakland-based organization helps pay for travel expenses seeking abortion care in California, in and out of state.

According to Sasha Nochimow, a representative at ACCESS, California Planned Parenthood has received an increase in out-of-state patients from areas with severe abortion restrictions.

“Since SB8 went into effect, which was Sept. 1 of last year, ACCESS has been supporting just other needs of people in Texas coming into California, but not a whole lot,” Nochimow said. “However, we have heard from our Planned Parenthood affiliates back in the Planned Parenthood Network of California [that] they are receiving one to three patients a day from Texas, which is an increase.”

In preparation for the official overturning of Roe v. Wade, ACCESS explained how they had been working to prepare for the additional people searching for abortion care.

“To combat lack of access, we are trying to make sure that our connections with abortion fund organizations in other states are really strong, so if they need to send folks our way, we have straight lines of communication there,” Nochimow said. “[Also] ACCESS is part of a council that we call the Future of Abortion Council in California, [which is] a group of different organizations, and together they compiled 45 policy recommendations to try to increase and expand access in the state of California and access to abortion in the state of California.”

According to CalMatters, Gavin Newsom is reviewing these bills, which are part of his plan to have California become a sanctuary state for out-of-state patients seeking an abortion. If they are passed and given as a part of budget funding, the new laws could come into effect this summer, when the Supreme Court could officially overturn Roe v. Wade.

One of the most significant bills, SB 1142, would create more funding for transportation for people in and out of state, which ACCESS is continuing to work to have in anticipation of the overturning of Roe v. Wade.

“We are also working at the ground to build a strong abortion fund and fundraising to ensure that we have even more money to get to the patients when they have to travel for care,” Nochimow said.

When hearing the news about the potential overturning of Roe v. Wade, many can feel a sense of hopelessness, as if the effects are out of people’s hands. However, donating to help support travel costs for those in need of abortion care can be a great way to support.

Another way to help support abortion rights is through protesting. Luiza Nunes, a junior and an organizer for a recent pro-choice protest, emphasized the importance of protesting.

“It is absolutely vital to the survival of the movement, that everybody is in the streets and they’re protesting, and they’re getting attention from media,” Nunes said. It’s not enough to post on Instagram about what is happening. Obviously, spread the word, but we need bodies, as many bodies in the streets.”

In a state like California, where there will still be access to abortion care no matter what the Supreme Court decides, it may be hard for some to feel the need to protest. However, Nunes stresses the importance that people should continue to fight for the right to abortion access no matter what.

“It’s a crisis,” Nunes said. “It’s a national emergency, and we should all feel entitled to participate and to fight.”