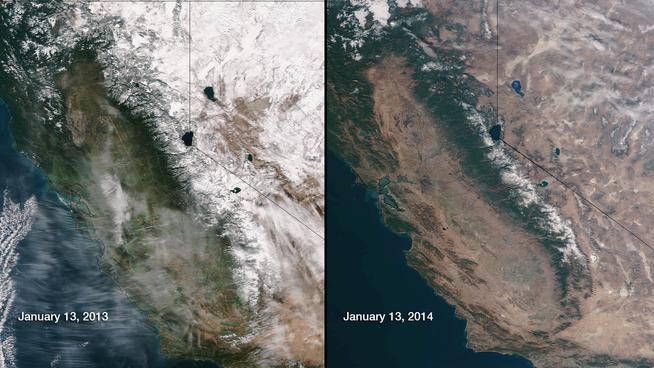 This picture shows the Sierra Mountain Range from space during 2013 (left) and the current drought of 2014 (right). Photograph property of NBC News.

Due to little rainfall in the past months and low water supplies due to wildfires and general usage, California has entered a drought.

Gov. Jerry Brown spoke in a press conference on Jan. 17 during which he said, “We need to awaken all Californians to the serious matter of drought.”

Most Californians had noticed the dry conditions during the fall and winter seasons, but Brown officially signed a proclamation declaring the situation a state of emergency today.

This proclamation will help the people who have been the most affected by the drought, such as farmers.

Karen Ross of the Calif. Dept. of Food and Agriculture said, “A lot of [farmers] are choosing not to [hire workers] because the prospects are so grim right now. One of the water districts reported that based on the situation last week they knew of at least 200,000 acres that farmers will not be planting this year.”

This could lead to a shortage in crops in the coming months, or higher prices for available foods.

Farmers are not the only people concerned about the drought California has recently entered. Carlmont students have started conserving water and cutting back their water usage in the hopes it will help the state’s situation.

Senior Claire Noemer said, “I think that people need to do as much as they can to help preserve the water that we do have now. Whenever I bring water home that I didn’t drink at school I put that water in our tea kettle and make tea with it. I also try to take as short showers as I can.”

The proclamation will also help move more water across the state and introduce a bigger public awareness campaign to help limit water usage.

For quick things to do every day to help save some water, Aflak said “I won’t leave the sink running when I’m brushing my teeth. I’ll take fewer showers, quicker showers.”

There are currently no predictions of when this drought will be over but until then Brown recommends all people cut down their water usage by at least 20 percent.