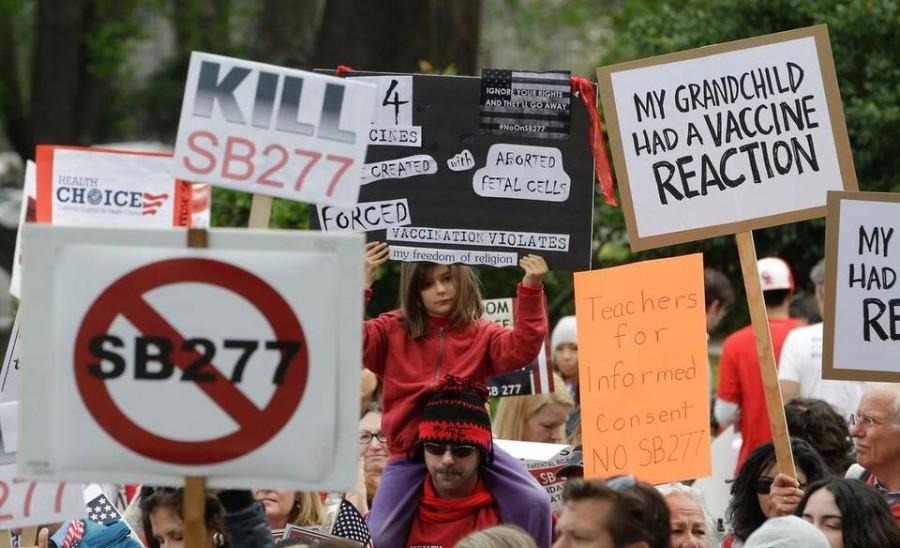 Protesters rally against legislation requiring California schoolchildren to get vaccinated.

California is now one of three states that has elected that vaccine exemptions based on religious or personal preferences are no longer legal.

In Sacramento on April 23, 2015, the California senate voted 25-10 to pass the measure SB 277 after compromising on minor issues.

Democratic Sen. Richard Pan of Sacramento and Sen. Ben Allen of Santa Monica introduced the measure after 136 Californians were sickened by an outbreak of measles in Disneyland last December.

“Vaccines are necessary to protect us. That protection has been eroding,” said Pan, a pediatrician, in appealing for passage, according to The Mercury News. “The science is clear: vaccines are safe and efficacious.”

Measure SB 277 requires that all children be vaccinated against ten agreed upon diseases before entering kindergarten. Medical exemptions are allowed. However, no personal or religious beliefs will earn an exemption.

There were two compromises made on the measure before passage in the Senate. The first was that the number of vaccinations be limited to 10 to prevent an over-expanding list of shots.

The latter correction was a promise of the author to “grandfather in” almost 10,000 students whose parents already had them exempted because of religious or personal beliefs.

The result is that 13,000 first graders who have not yet had shots won’t receive vaccinations until entering seventh grade.

In addition, the 10,000 current seventh graders who have not been immunized may never be, since the State does not always require vaccine records after seventh grade.

According to The Mercury News, this move was aimed at mollifying hundreds of angry parents who have staged rallies and jammed hearing rooms, citing their concerns over vaccine side effects and asserting their parental rights.

“The anti-vaccine folks are going to make a very hard push, but passage in the Senate is a good sign it will become law,” said Jack Pitney, a politics and government professor at Claremont McKenna College.

“Pan made changes that made it more acceptable to some of the critics and that should greatly improve its changes in the Assembly,” Pitney said.

The bill has moved on to be voted on by the entire Assembly.