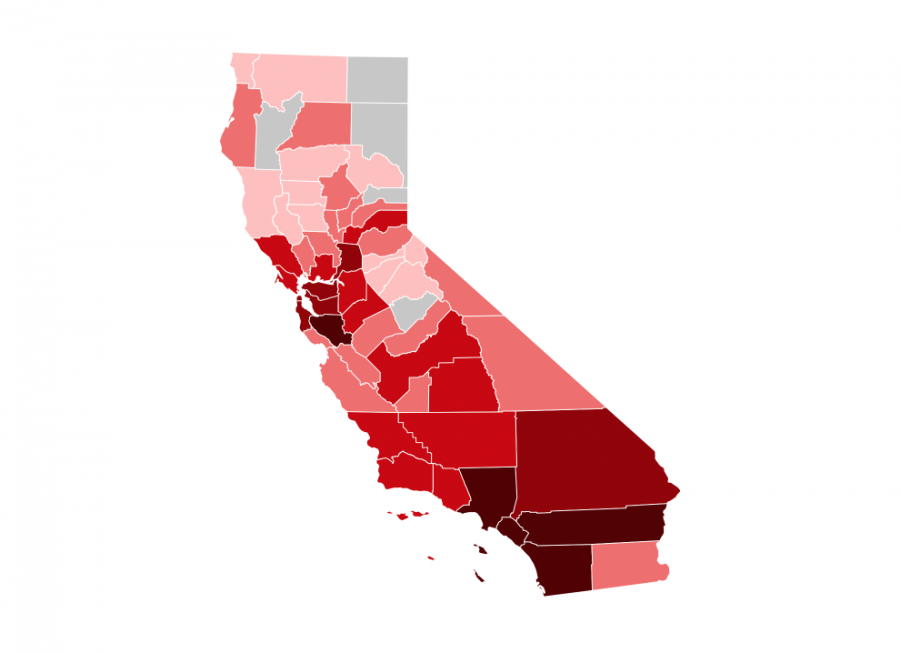 A map of COVID-19 cases in California by county details the extent of the virus. The map was last updated on April 12.

On Tuesday, California reported over 2,600 COVID-19 cases, surpassing its daily record of 2,417 cases from April 29. With over 1,500 cases, a majority of them came from Los Angeles County.

On the other hand, New York had over 2,200 cases. Until Tuesday, New York reported the largest number of daily cases in the U.S., according to The Hill. As the most impacted state, New York makes up around 27% of America’s confirmed cases. The state also makes up about 35% of COVID-19 related deaths.

However, California is a long way from becoming the U.S.’ new epicenter of the COVID-19 outbreak. Many factors come into play with this large increase; the two most likely causes are data backlog and an increase in state testing.

In addition, the state has also seen a pattern with sudden spikes in daily reported cases. When California reached its previous record high in daily cases, the number of new cases dropped by over a thousand the next day. For the remainder of the week, the daily count stayed under 2,000.

Still, despite this new record, California is making progress in dealing with the virus. Two weeks ago, the weekly death count was 542. Last week, the death toll dropped to 495 fatalities, a 9% decrease.

However, California is predicted to reach a statewide infection count of 60,000 this week. If it does, California will be the fifth state to have over 60,000 confirmed cases. Currently, the state has nearly 55,000 cases.

Despite this, Stage 2 of Gov. Gavin Newsom’s plan to reopen California is expected to begin later this week.