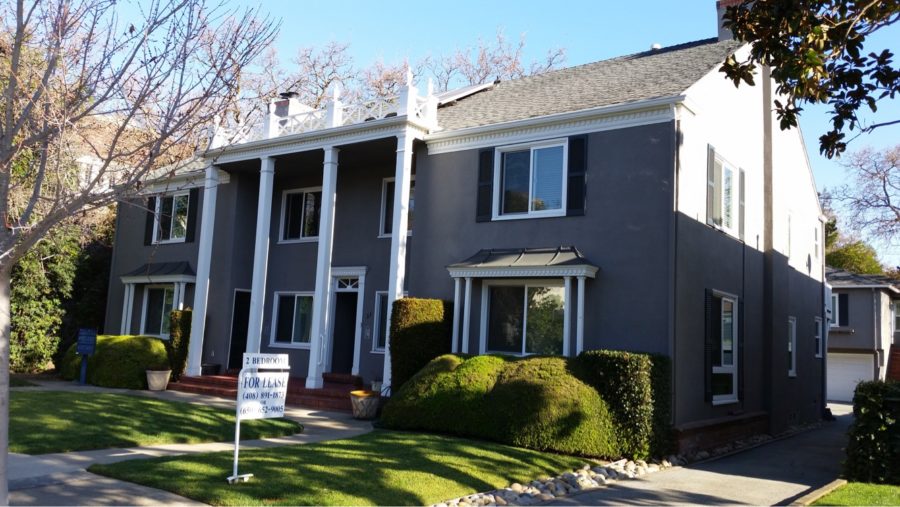 A property is advertised to potential renters. Prop. 10 would lower or cap the rent price on this house if passed.

Proposition 10, also known as the Affordable Housing Act, is on the ballot for California’s general elections this year. If the measure is passed, it will repeal the Costa-Hawkins Rental Housing Act.

According to Curbed Los Angeles, Costa-Hawkins was passed in California in 1995, enabling landlords to raise the monthly rent of their properties as much as they wanted, usually to match the market value.

Prop. 10 wants to repeal Costa-Hawkins and put a limit on how much landlords can raise their monthly rents. Although this may seem like a good idea, there are also a considerable amount of negative effects to implementing rent control as well.

“In most cases, rent control is at best a mixed bag,” said Bruce Spiegelman, a current apartment renter and building manager. “If we look at it from the standpoint of basic economics, it can reduce the supply of available homes and exacerbate the housing issue. However, in specific instances like [the ones] California cities currently find themselves in, I believe it’s one tool that can help get people into homes and prevent necessary workers from leaving the area.”

According to the 2018 Voters Guide, housing renters are generally in favor of Prop. 10, while landowners are against it since having a restriction on how much they can increase the rent per month means they cannot benefit as much from the ownership of the house.

Although Prop. 10 would make housing more affordable, it would also cause rent prices to fall far below market value if there were to be a sudden increase in their property’s financial worth.

However, this isn’t the only major downfall of the proposed idea.

Richard Dooley, the former director of asset management for Northwestern Mutual, said, “I am against rent control. It disincentives owners from maintaining their properties and ultimately can result in urban blight. If you prohibit an owner from achieving a good rate of return on their investment, they will have less money to invest in their properties. This leads to poorly maintained buildings, ugly properties, and makes neighborhoods worse.”

In addition, Prop. 10 can be seen as counterintuitive, as it may ultimately lead to more expensive housing, the complete opposite of its goal.

“It makes investors less likely to buy or build properties in areas with rent control. This means you end up with fewer apartment buildings or houses, because why would an investor put money into a community or build an apartment there that limits their rate of return? So the housing stock ultimately decreases as a result of rent control. This results in fewer homes which ultimately makes housing more expensive,” Dooley said.

On the other hand, it is quite expensive to live in the major cities of California, and because of this, many employers, including small companies, schools, and restaurants, are losing employees because they don’t get paid enough to live here.

“In the short term, we are losing workers for key industries that the Bay Area can’t do without. For instance, San Francisco schools cannot hire enough teachers because teacher salaries aren’t high enough to allow a teacher to even rent a small place. This is true for a whole range of necessary service industries,” said Spiegelman. “I don’t think there is a single way to fix a complicated issue like this, but I think rent control is one tool that can help.”

In addition to offering affordable housing, Prop. 10 would also decrease commute time for people who have to live far from their jobs because of how expensive it is to live there. Overall, this would benefit the environment.

The full text of Prop. 10 explains that homelessness is also an issue since 22 percent of the homeless people in the United States are in California. The measure would make it easier for them to afford housing.

At this point, it seems like Prop. 10 will be approved.