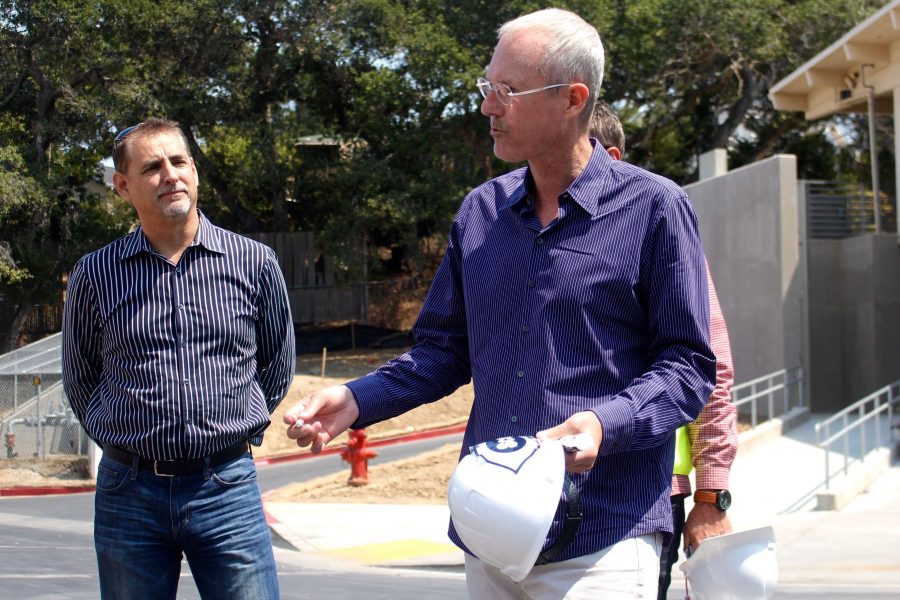 District Chief Facilities Officer Matthew Zito commences the ceremony for the last beam to be placed on the building.

Over the sounds of a busy construction site, Carlmont administration held a commemorative ceremony as the new “S” wing project reached a significant milestone.

On Friday, Aug. 20, 2016, board members, city officials, and Carlmont staff signed the final beam of the building’s framework. The signers took turns to sign their names and a small message or phrase.

“It’s a symbolic ceremony because no one will be able to see the signatures once the building is finished, but all these people signing have worked very hard to support the project and Carlmont,” said Vice Principal Grant Steunenberg.

The new building will hold ten classrooms as well as collaborative space for students. Once the building is complete, the area around it will be repaved and designed for students to use during lunch.

District Chief Facilities Officer Matthew Zito said, “The new “S” wing along with the biotech building and the renovations of the Student Union will give the northern quadrant of the campus a new look and will be a huge improvement. The new building will have two science rooms, one photojournalism room, and seven other classrooms.”

Over the summer, the foundation of the building was poured. As the final beams of the framework are put into place, the project is on track to finish before the start of the 2017 school year.

“The project is now well into phase two. In phase one, the ground had to be dug and leveled. The project also required some large retaining walls to be built and the electrical systems in this area of the campus had to be updated,” said Zito.

The “S” wing is not the only construction happening currently at Carlmont as the Student Union and locker rooms are being renovated. In the Student Union, the kitchen and cafeteria are being redesigned. The locker rooms were cleared out and new equipment and lockers were put in. The school also plans to redesign and expand the weight room and the adjacent outdoor basketball courts.

“There have been some complaints about all the noise from the amount of construction happening in this area currently, but once the projects are done, this corner of the campus will be much nicer for the students. In the long term, it’s worth it to give the students the best environment to learn in,” said Steunenberg.