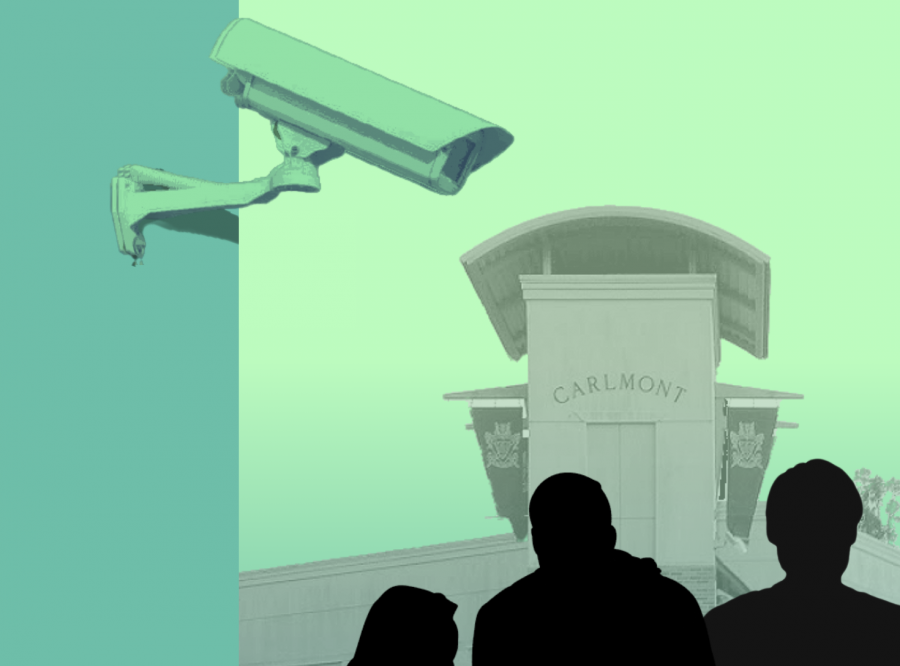 Among the duties of campus security, reviewing surveillance camera footage is one of many.

The flow of events is constantly under the watchful eyes of campus site supervisors at Carlmont High School. Whether it be at a school-wide assembly or during a passing period, campus security monitors everything that happens on-site.

Though their duties were somewhat reduced during distance learning, security has continued to function consistently throughout the year. As students began to return to campus, their duties began to again ramp up, and they took on added responsibilities.

“[During the pandemic], the campus security had to support the school with sign-in, materials distribution, monitor students coming onto campus to pick up books, and to manage the traffic flow at times,” said Administrative Vice-Principal Gregg Patner.

According to Carlmont Principal Ralph Crame, campus site supervisors are present chiefly to ensure the safety of students and staff. Their most basic responsibilities are supervising students and school entrances, but their presence is essential for numerous other circumstances.

“[Campus site supervisors] help in emergency situations by ensuring fire or paramedics have a clear path to their destination when they are called to the campus. They are also there to support students when needed,” Crame said. “They help de-escalate situations involving students who may be having a disagreement, help supervise athletic events and dances, and also monitor and review the camera footage on campus when needed.”

With the drastic changes in learning due to COVID-19, Carlmont supervisors had to just some of their duties.

“Their main responsibilities really did not change during the pandemic,” Crame said. “They are still responsible to ensure the safety of the students and staff here on campus. With fewer students, it just looks a little different and they took on the responsibility of helping check students in who are now coming to campus.”

Campus security also had to perform other tasks, like watching over cohorts and controlling vandalism.

“Last year, the campus security had to work outside their normal job responsibility to support campus considerations, like supervising cohorts,” Patner said. “They also had to be present to manage people from the community coming onto campus to use facilities that were not open to the public and had to manage individuals who came onto campus to vandalize.”

In reality, campus security did not change significantly as a result of stay-at-home orders. Now that Carlmont is on track to return to in-person education and activity, campus security will undoubtedly be capable of supervising school activities, directing traffic, checking in students, and facing additional tasks from both past and present states of emergency.