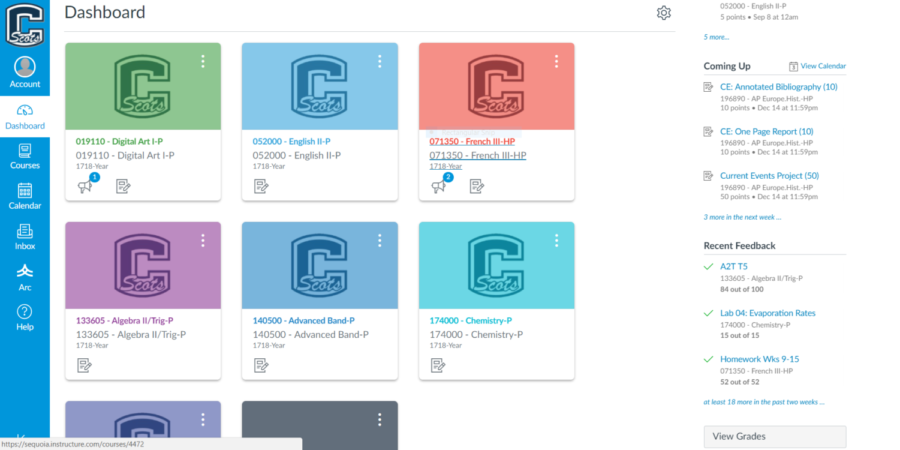 This is the dashboard on Canvas; it is the first thing that pops up after logging in. It shows classes, notifications, and upcoming assignments, but it doesn't show grades.

For many students, grades are one of the most important school-related thing, and having easy access to them can be important. This year, Carlmont switched from School Loop to Canvas for grades, assignments, and submissions.

As the semester moved along, there were mixed reactions to the new system and its features and interface.

“I very much dislike the fact that the grading program does not have a ‘relative weight’ feature, so that I have to do the math by hand to keep my test grades worth the same amount,” French teacher Katya Burton said.

With Canvas, there are many features that are new to the entire school, such as peer grading through Canvas, sending instructional videos to a class, and having a calendar where activities are located. As some expected, the use of said programs didn’t go as smoothly as some hoped, but for others, they went above and beyond.

Jerry Liu, a junior, said “I like how Canvas gives access to instructional videos and files given out by the teacher. I don’t particularly dislike the app but it is annoying how my events don’t show up on the calendar.”

Some of these aspects worked well for teachers as some features take less time and effort to use than their counterpart on School Loop did, such as class notifications.

“I love being able to send announcements out to all students in each class with one click. That feature is better than School Loop where you had to send class emails,” said Burton.

Canvas also developed an app for use on mobile devices. There are some aspects that irritated people because it was a new interface and unknown territory. However, other aspects pleased people because the Canvas app does things the School Loop app didn’t.

“I like how the app gives notifications for everything because it makes it convenient,” sophomore Alexis Shohet said. “But I don’t like how slow it takes to load grades on the app.”

Over the course of the semester, teachers and students have gotten used to the program, and some opinions about Canvas have changed.

“At first I was a bit confused on how to navigate it, but now that I have the app, it is much more simple,” Shohet said.

Overall, there were mixed thoughts about the platform switch, and opinions will continue to change as the school year moves forward, issues are addressed, and improvements are made.