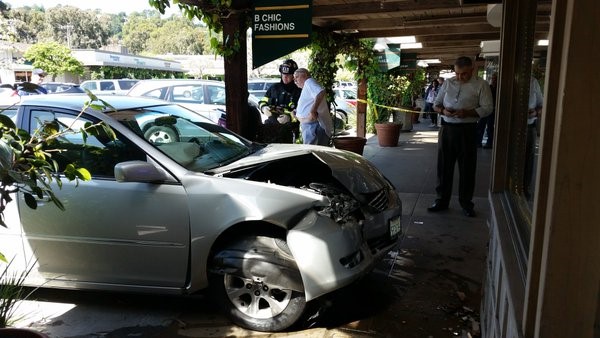 For the second time in six years, a car has crashed into the Carlmont Shopping Center.

On Tuesday, March 15, Gin Mon Chinese Restaurant received a blow as an elderly gentleman, whose name is not being released to the public, ran into the outer wall of the restaurant. The gentleman, a Belmont resident in his 80s, mistook the gas pedal for the brake pedal and ran “straight into the restaurant,” according to Captain Patrick Halleran of the Belmont Police Department.

According to Halleran, there were no injuries, but the gentleman did run into a parked car as he accelerated. He and his passenger were protected by airbags and were deemed uninjured by the paramedics that arrived on the scene.

In January 2010, the Carlmont Shopping Center’s Subway experienced the same situation when an 81-year-old man pressed the accelerator instead of the brake and sped into the sandwich shop.  Subway underwent renovations to repair the broken front door and window and reopened with a new interior.

Sophomore Will Klieves was at the Shopping Center when the accident took place.

“It’s scary to think that someone who is an experienced driver can make mistakes like these,” Klieves.

However, according to EverythingZoomer.com, pedal mix-ups are extremely common, no matter the driver’s experience.

“Drivers will often feel the sensation of movement when manipulating the brake pedal. Their reasoning is as follows: “If the pedal I am using is making the car go forward, then the other pedal must make it stop. When a driver is startled and the vehicle has been recently started, a strong idle will often vault the vehicle forward and create the illusion of intended propulsion. The natural thing to do seems to slam a foot on the other pedal, namely the gas pedal,” said the Canada-based magazine.

In both cases, an apparent pedal mix-up was the cause of the accidents.

Halleran said, “This situation could have been very bad, but we are fortunate there were no injuries to the driver or to those passing by.”