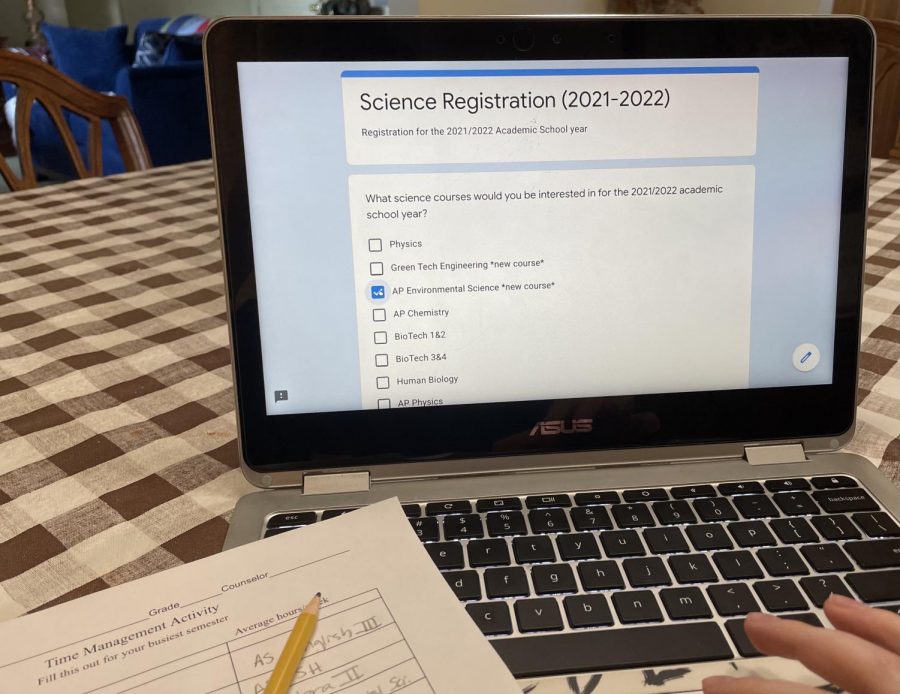 Students weigh their options on what science class they want to take next year before their counselor meeting to finalize course selections.

Two science courses, AP environmental science and green technology engineering, have been added as course options for next year as students are in the process of choosing next year’s classes.

Green technology engineering is a returning course that was popular among students, but Carlmont stopped offering it due to limited staffing. AP environmental science, however, is a new class for Carlmont.

Gay Buckland-Murray, the instructional vice principal, explained the significance of including these two courses to make science more approachable.

“We want to make sure that there are science offerings for Carlmont students that allow students to take science for all four years, but they don’t have to take an AP,” Buckland-Murray said.

Even though AP environmental science is an AP course, Michal Nozik, Carlmont’s science department chair, explained how it is more accessible to students.

“Some of the other classes have a higher math requirement, which may be a bit more challenging for the students,” Nozik said. “AP environmental science is also very hands-on with a lot of labs and research. So we’re hoping that that format is going to make it more accessible to a larger group of students.”

For students interested in green technology engineering but were unsure what the class was about, Nozik provided insight on how that program worked.

“Green technology engineering is a very hands-on class; it’s a project base class, meaning it’s not a lab class,” Nozik said. “Engineering is all about solving problems, so [the students] will have some type of problem, which they will need to design solutions for. In the past, students have designed bridges.”

Nozik also described how the AP environmental science ran for students who had questions on what this class offered.

“AP environmental science [looks] at the interactions between society, people, the environment, and different parts of the earth system and atmosphere [to answer] how people affect the environment, [and] what challenges we have right now regarding pollution, [and] regarding biodiversity,” Nozik said. “We research it, we learn more about it, and maybe even design solutions for some of the problems.”

“Climate and pollution [have] always been something that’s talked about, but we never really learned about it in school or learned how to fix it or have opportunities to get involved with this stuff,” Block said. “That’s why I really like these classes because it brings more attention to people about the things that are happening to the planet.”

Currently, both green technology engineering and AP environmental science are not on the official master schedule. Instead, they are listed as options to see how many students would be interested before officially adding the class, according to Buckland-Murray.

“In order for the course to be formally on the master schedule, we have to have a certain number of students signed up for that course [for] it to become viable [since] … we can’t run the course if there are only 12 students who sign up for it,” Buckland-Murray said. “This is true of all of the classes students take at Carlmont, especially if they are not a graduation requirement.”

Block is one of the many Carlmont students interested in taking one of the new courses and wants to take AP environmental science. She explained why she is happy to take this class at Carlmont to help explore her interests.

“I’ve always been interested in the environment. I’ve been thinking about possibly majoring in environmental conservation science, so being able to have an introductory class to this in high school is really helpful to see if this is a subject I like learning about [and] to see if that is something I want to pursue in my life,” Block said. “That’s why I like that [this is] a class that’s being offered because it is something that I’m interested in, and possibly other people are interested in it too.”

As for the science department’s future, the plan is to expand on these two new proposed courses if those classes end up being viable. They might also add an entirely different class. Still, most of it depends on what the students want to see.

“One of the courses we were looking at was astronomy [since] … the curriculum exists, and we may consider bringing it to Carlmont in the future, but we are hoping that perhaps green technology engineering could move to an engineering pathway,” Buckland-Murray said.

For Nozik, she wants to make sure that students can find and study different topics they are interested in, especially during high school.

“There are so many different classes and so many opportunities that we know that people are going to find something that they like. Just try different things. This is a time to try and explore and learn as much as you can,” Nozik said.