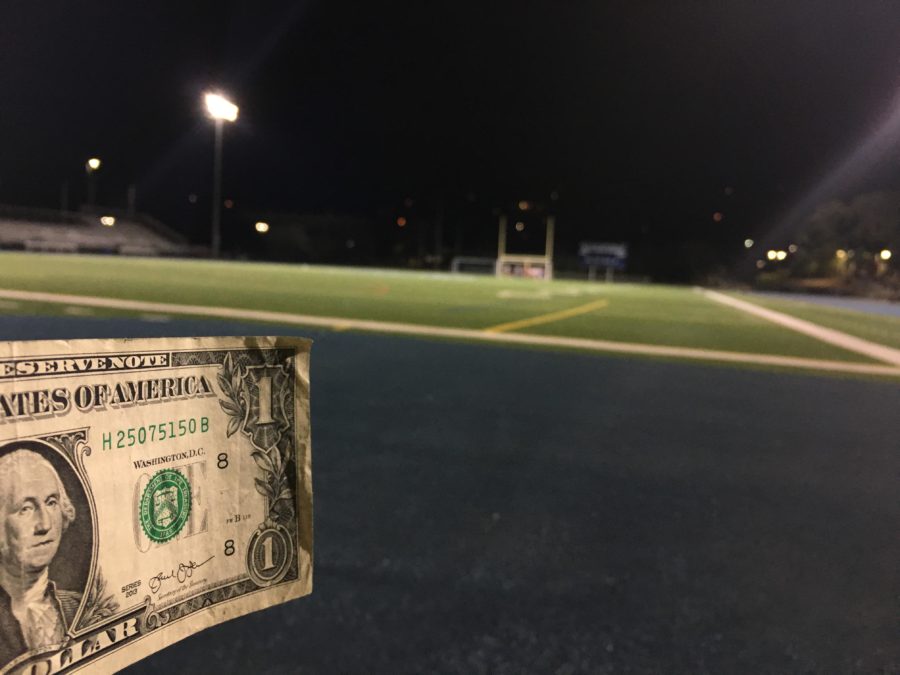 A dollar bill displayed in front of the Carlmont football field.

Although the Sequoia Union High School District provides funding to the Carlmont High School athletic program, it is not enough to meet the financial needs of the more than 30 Carlmont sports teams.

The Boosters have raised nearly $100,000 per year, ensuring that the needs of the other sports teams are met.

The majority of the funding raised for this school year, after discussion with the coaches, was used toward the completion of the new Carlmont gym, which cost $100,000. The remaining $42,000 raised by the Boosters was distributed to other sports teams based on need.

“There isn’t ‘priority’ given to any particular sport unless that sport requested a bigger ticket item (scoreboard for baseball, fencing for softball, sound system for the gym, etc.) and the Boosters agreed to fund.  The funds aren’t distributed evenly either, but according to the need/asks by each individual coach,” said Kathryn Zorb, president of Boosters.

The fundraising goal for this school year is $75,000. The Boosters raise money through membership sales, senior athlete volunteers, the selling of Scots gear, and most importantly, a yearly fundraising party called The Shindig, which raises the most revenue for the program.

Membership sales are $50 for an individual, $100 for a silver family, $200 for a gold family, $300 for a platinum family, and $500 for a millennium family, with the more expensive memberships providing additional benefits.

“It’s really important to increase and keep membership numbers high to continue to be able to fund the programs we have and invest in future capital projects,” said Van Arsdel.

The Shindig is being held on April 21, 2018, at the Devil’s Canyon Brewery. All parents of Carlmont athletes are encouraged to attend the event.