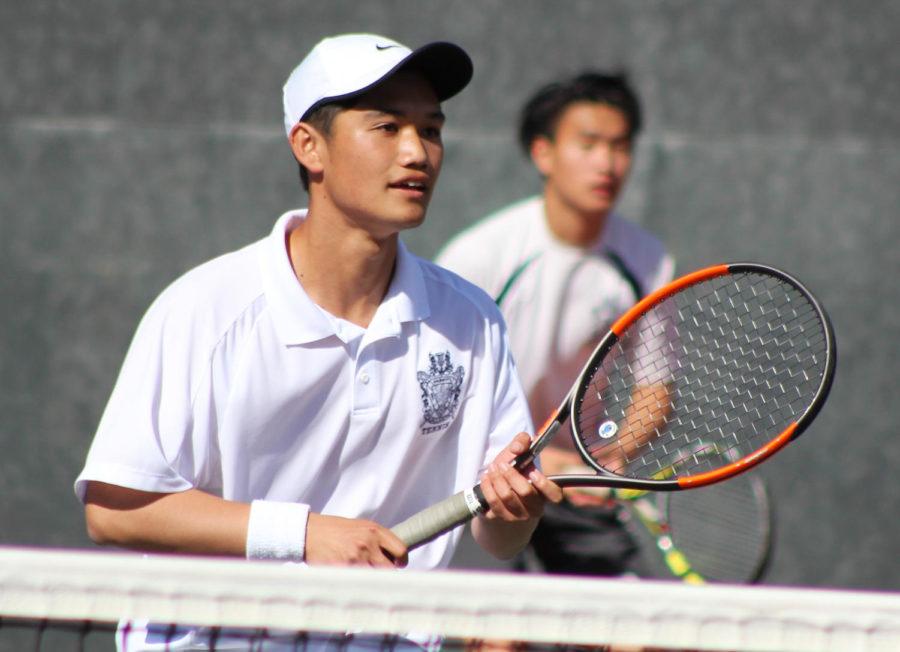 With the PAL Bay Division title on the line, the tennis courts of Carlmont were filled with anticipation, cheers, and cries of frustration as the Scots faced Menlo-Atherton (M-A) on April 19.

Despite having won 12 matches, tensions were high for Carlmont’s head coach, Dan Nguyen, and his team as they knew this match would be one of the most challenging ones yet.

“We’re pretty anxious because this is a big match against a really good team,” Nguyen said. “I’m hoping we can bring a lot of intensity because M-A has always solidified themselves as winners and in order for us to beat them, we really have to bring it.”

“We need to win because if we don’t we could possibly lose our first place title which we’ve held for nine years,” Berthier said.

M-A started out strong with a 6-0, 6-1 win in No. 4 singles against Carlmont senior Edward Zhou. Shortly after, M-A gained another victory in No. 3 singles when Carlmont sophomore Ben Barde faced M-A senior Jeffrey Jorgenson while playing with a foot injury.

Carlmont senior and varsity captain Kevin Xiang and his partner, junior Jerry Liu, won the last time they went up against M-A, but this time the lineups changed. The No. 2 doubles team lost 2-6, 0-6.

After coming off the court, Xiang continued to stay positive hoping that the rest of his teammates would keep up the intensity.

“I think we can get these three wins in. That puts the pressure on our last doubles which strategically, that’s like an underdog, but their point matters just as much as everyone else’s,” Xiang said. “We value all our players.”

However, it was clear that Carlmont would not be able to make it once the No. 3 doubles team of Carlmont seniors Jason Liu and Brian So lost 2-6, 2-6.

Even though the possibility of Carlmont winning was lost, the Scots continued to cheer for their teammates as their senior captain Thomas Reznik faced Berthier.

Fellow captain Xiang was among the boys watching Reznik.

“Thomas has been our number one player for four years in a row so we always expect good games from him, but M-A is the toughest opponent we have, and the guy he is playing is really good as well,” Xiang said. “It’s a tough match but I think he can bring it in.”

Carlmont sophomore Milad Shafaie also had a great match with a strong 7-5, 6-2 win.

While their 2-5 defeat marked the end of their regular season, the Scots continued to stay positive.

As the team huddled up after the game, Jason Liu and Reznik told their teammates how proud they were of the team’s performance.

“Our team is doing great. Our team spirit is amazing,” Liu said. “This year was probably our most likely year to beat them, but then again, they brought their ‘A-game’ and it’s always difficult playing against them.”

Reznik then tried to put their game into perspective.

“In the past four years, we have never gotten that close to beating M-A. It’s been a terrific regular season, the best in my four years. We got this. We have a team and we have spirit, so we just have to bring everything we’ve got to PALs and CCS because I know our team is up there with the big guys,” Reznik said.