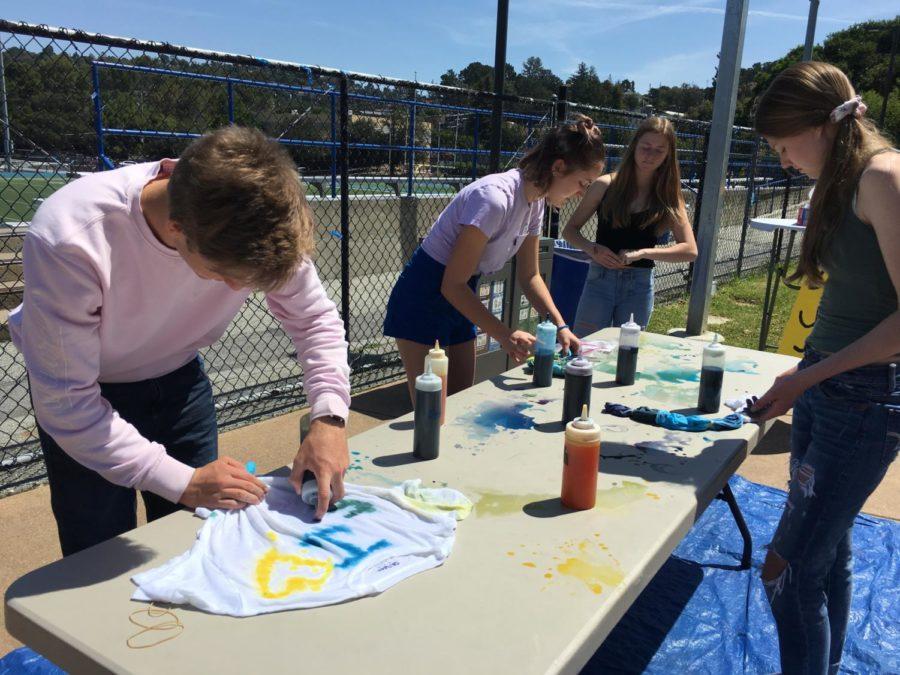 Griffin Soelberg tie-dyes a white shirt in the quad of Carlmont during lunch.

Carlmont students showed their appreciation of the planet for Earth Day with tie-dye and face-painting in the quad on April 23.

Earth Day is an annual event celebrated on April 22 all over the world, whose purpose is to raise awareness of environmental protection and what people can do to help save the earth from pollution. The celebration began in 1970 and has been coordinated every year by the Earth Day Network.

The network organizes Earth Day celebrations in over 193 countries and wants to the rid the ocean of poisonous plastic that can harm marine life and coral reefs.

Many students feel very strongly about the earth we live on and Earth Day is a reminder to not take it for granted.

“I celebrated Earth Day because it’s a good reminder to appreciate the world we live on and to not take advantage of it,” Chloe Palarca-Wong, a sophomore, said.

People do not realize that the planet is facing increasing levels of pollution and global warming due to fossil fuel emissions into the atmosphere. The earth is declining in health and can only be saved by the actions humans take.

Earth Day reminds people to do what they can to help the environment whether that be taking shorter showers or taking a bike to work.

“We don’t realize how important the earth is and if we don’t do anything to help the pollution, the earth, as well as humans, will suffer consequences,” Tomas Ronderos, a sophomore, said.

Pollution is a serious issue, but Earth Day can help face the problem and help make a global solution to a global problem.

At Carlmont during lunch, students could come to the quad and tie-dye white shirts, get their face painted, get animal tattoos, and make globe keychains. This not only rose awareness to the environmental problems that Earth faces but also brought the Carlmont community together in their one common goal – to make the world a better place.

“I am glad that Carlmont let kids come together in the quad and tie-dye and do other activities because it was pretty fun and brought a bunch of kids together that wouldn’t usually be together,” Ben Pasion, a sophomore, said.

The earth is a beautiful place and Earth Day is a global movement to keep it that way.