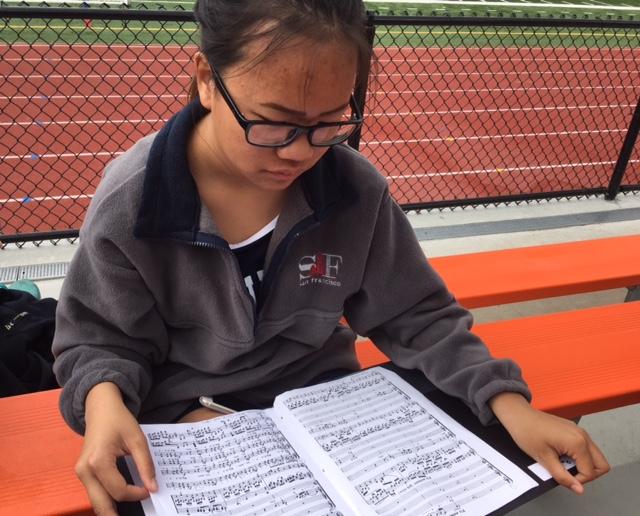 Jessica Lui, a sophomore in Concert Choir, reviews her music for Wolfgang Mozart's "Coronation Mass" before the trip to New York.

As students look forward to relaxing on spring break, singers from Carlmont Choirs set their sights on the stage at Carnegie Hall.

Choir students are traveling to New York City from April 13 to 18 for their performance of Wolfgang Mozart’s “Coronation Mass” on the night of April 17, in collaboration with singers from other high schools and professional choirs. During the trip, students will also tour colleges, watch various Broadway shows, and see the Metropolitan Opera.

The choir was invited to Carnegie Hall by the conductor of the concert, Jeffrey Benson, who is the director of choral activities at San Jose State University.

Genevieve Tep, the director of Carlmont Choirs, said, “I want the choir kids to have an experience they may never get again. Singing in Carnegie Hall is a huge honor and I hope that it is something that they never forget.”

Choir students have been rehearsing the “Coronation Mass” all year. Even students who aren’t performing in New York have learned sections of it. In “Bach to the Future,” the choir’s winter concert, they performed the first two movements of this six-movement piece. They are singing the third movement in this year’s upcoming spring concert.

The students who are going on the trip have had many after-school rehearsals to learn the rest of the song, and they have more rehearsals planned in New York with the other choirs.

“I think I’m well prepared because we’ve been practicing and perfecting the music for a long time, and if someone makes a mistake, you won’t be able to tell since there will be so many people,” said Dagny Klieman, a freshman in Women’s Choir.

Carlmont Choirs have done many concerts, but for many students, this is their first one outside of the local area.

“Since it’s so far away, I feel more anxious for this concert because I could forget something at home, or my attire could be wrong,” said Kalea Pasion, a junior in Concert Choir. “I feel like there are more variables that could go wrong since I won’t be at home before the concert.”

Students are also eager to participate in all components of the trip, from the concert to other activities and free time in the city.

Klieman said, “I’m most looking forward to seeing the shows, like Aladdin, because I think it’ll be really cool to see a big production on Broadway.”

The trip will overall last four days of spring break as well as two days into the school week.

“I feel like I’m doing something productive over break. If I wasn’t on choir tour, I’d probably be sitting around at home the whole time,” said Pasion.

As a result, students who want the opportunity to go to New York have to take responsibility for the two days of school they miss.

Will Nadan, a sophomore in Chamber Choir, said, “I’m unhappy about missing school because getting make-up work and tests in addition to the normal homework we get can pile up and be stressful.”

However, the choir tour can be more useful to students in the long run than just a fun trip to New York.

“It’s important to provide as much opportunity as possible for our singers to experience independence. I think it helps them in college and in life,” said Tep.