Carlmont class of 2021: The stories that shaped us (The Lord of the Reads #5) 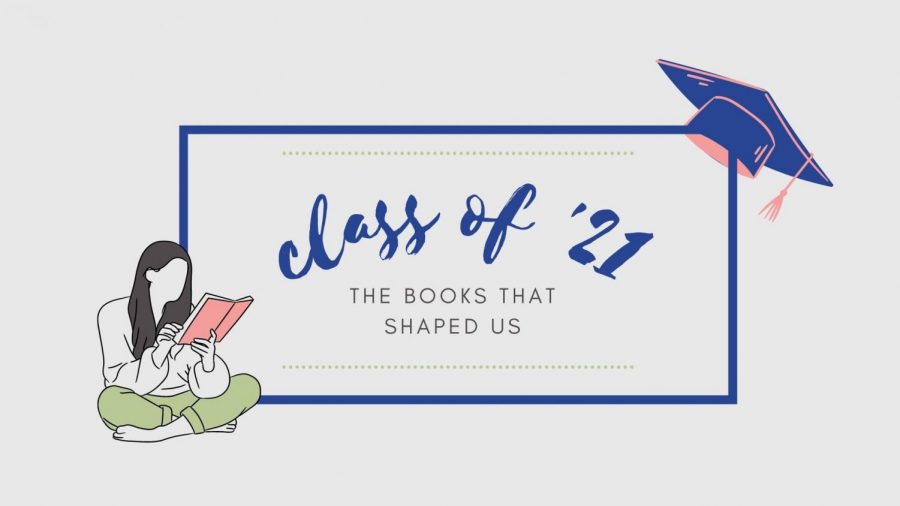 Over the past four years, each senior has developed a unique, personal experience with the books they have read.

Our tale is nearing an end, but it’s not quite done yet. We’ve woven stories of magic rings, faraway planets, spaceships, heroes, villains, and even the people behind these creations.

However, there is one last thing we have not explored: ourselves.

Welcome to the fifth and final installment of The Lord of the Reads!

This one is going to be a little different. I spent the past four articles detailing the merits of science fiction and fantasy writing, and I had an amazing time. I still have so much to say, but the end of the school year is just around the corner, and it’s almost time to close the book on The Lord of the Reads. There is one last article that I wanted to write, however, and it strays beyond the boundaries of genre.

Today, we’ll be looking at literature as a whole and how it has shaped the Carlmont graduating class of 2021.

It’s nearly impossible to experience high school without literature having some impact on you. Whether it’s a classic assigned by your English teacher or a young adult series recommended by your friend, reading affects each and every one of us as we make our way through our four years at Carlmont.

For seniors, those four years are almost up: four years of assigned reading, trips to the library for that new release, and borrowed copies of a friend’s favorite book. As our time reaches a close, I wanted to look back on the stories that meant the most to us. Of the five students featured here, each of them has been impacted in unique ways by a variety of stories, from plays to thrillers to fairy tales. Though the kinds of stories they read may differ, each senior’s high school experience has been irreversibly shaped by what they have read.

When Kaylie Corbett read Michael Ende’s classic The Neverending Story last year, she found it to be the perfect distraction from quarantine life.

“I read it […] during quarantine, so needless to say, it was a great escape from reality,” Corbett said.

Though the book is marketed as children’s fantasy, it was largely influenced by mature topics like Ende’s experiences growing up during the Great Depression and fighting with the Bavarian Resistance during World War II. Originally published in German under the title Die unendliche Geschichte, it was translated into English in 1983. Well-known for its movie adaptation in the 1980s, the story’s influence is seen across other diverse art forms, from music to theatre.

The Neverending Story has been interpreted as a story of depression and authoritarianism by some readers, but to Corbett, the book’s value lies in its fantastical and artistic aspects.

“This book is a fairytale, blending the experience of a child and a magical land of fantasy,” Corbett said. “As a storyteller, I loved the themes about art and literature and innocence that [the] story developed.”

While Corbett was drawn to the fairytale nature of The Neverending Story, Connie Gong appreciates The Goldfinch, a contemporary fiction novel by Donna Tartt. A Pulitzer Prize-winner, the book follows a New Yorker named Theo, whose mother was killed in a museum bombing.

Gong’s love for The Goldfinch revolves around her love for its characters. Boris, a friend of the main character, is her favorite. She cites one passage from the novel as her reason: “[…] it occurred to me that despite his faults, which were numerous and spectacular, the reason I liked Boris and felt happy around him from almost the moment I’d met him was that he was never afraid. You didn’t meet many people who moved freely through the world with such a vigorous contempt for it and at the same time such oddball and unthwartable faith in what, in childhood, he had liked to call ‘the Planet of Earth.'”

Though The Goldfinch was an independent read, Gong has also found value in assigned reading. This semester, Carlmont’s AP Literature class read Waiting for Godot, an existentialist play by Samuel Beckett.

According to Gong, Beckett is “a genius and a bada**,” and “the characters […] are also so endearing.”

Beckett has always been open to a wide array of interpretations. Many readers (including myself) are confused and/or depressed by the absurdist, existentialist nature of the play. Gong’s interpretation, however, convinced me to take another look at Godot: For her, the play was uplifting instead of depressing.

“I think the play was magical in the way that it made me more cynical and more hopeful at the same time,” Gong said. “I think I’m able to take things more lightheartedly after reading it.”

For Jill Bryan, Left Neglected by Lisa Genova is also a story of hope, as well as gratitude. The story follows a family facing the aftermath of serious injury and was crucial to Bryan’s high school experience.

“Being able to read about and become more grateful for the little things in life […] has allowed me to look at my own life from a different view,” Bryan said. “Often, the things that we stress over do not matter, but there is meaning in the small experiences of life.”

While Bryan appreciates the hope and gratitude she finds in her reading, Mia Yang enjoys the more cynical worldview present in Iris Murdoch’s 1978 novel The Sea, The Sea.

“I didn’t appreciate this book until I reread it again later on,” Yang said. “It comments on how many of our passions in life fade or become useless, and about how in old age, much of what we’re left with is simply our own integrity and regrets.”

Like Gong finding both cynicism and hope in Waiting for Godot, Murdoch’s novel creates opposing feelings for Yang.

“It was comforting and yet discomforting,” Yang said. “It reminds one that – no matter what one accomplishes – they’re still left alone with their own personality and faults at the end of the day.”

Reading, like most things, has been impacted by COVID-19. During the quarantine spanning his junior and senior years, Rory McGann saw connections between Dan Brown’s sci-fi thriller Digital Fortress and our own reality.

“As I was reading it and as senior year unfolded, the applications to our current situation really revealed themselves: people trapped inside, forced to deal with more technical problems than they are used to, and working against the clock to defeat a virus,” McGann said.

In addition to its more dire similarities to our daily lives, Digital Fortress holds significance for McGann through its exploration of what it means to be grateful. Despite the loss of nearly three semesters of in-person learning, the novel has helped him stay positive and mindful of the good that has come from his experience, including finishing a draft of the novel he has been working on and finding more time to read independently.

“I think both the characters in the book, and I learned to appreciate the things we had before and what we have now a lot more after the event was over,” McGann said. “I’m grateful for the parts of high school we did get to have, and I am grateful for the excellent teaching that the staff has delivered through these unprecedented times.”

Reading in and of itself holds meaning to these seniors beyond individual books. Some, like Bryan and McGann, find gratitude within the stories that they read, while Yang appreciates the way in which fiction can make us uncomfortable. For Corbett, reading is a chance to unwind from the stresses of daily life, especially school.

“Reading has helped with destressing and balancing my life,” Corbett said. “I read for at least 30 minutes before I go to bed, and that helps me unwind from all the stress from homework, school, and things in my personal life. During AP season and other stressful parts of high school, I always had a book to bury my nose in and escape to.”

McGann also loves the ability to slip into another world.

“I think the experience of being sucked through the pages into a world that the author and reader create together is really incredible,” McGann said.

Though escapism is a major factor for a lot of readers, literature of all kinds can also deepen our understanding of ourselves and the world around us. To Gong, reading means connection and growth.

“This is cliche, but I really do think you are shaped by what you read, that characters and themes invariably shape the way you function as a human being and the way you see the world,” Gong said. “I think that [is] important because it makes us all less isolated and more empathetic.”

Whether a person reads for escapism, understanding, connection, gratitude, or something else entirely, each student has a complex relationship with the books they’ve read over their high school career. We have each been shaped by the books we’ve read, and in turn, learned to tell our own stories. The next stages of our lives may bring us new interests, new opportunities, and new adventures, but these five seniors will carry their passion for words beyond graduation.

“Reading has helped me realize what I want to do in life, and for that, I’m so grateful,” Corbett said. “I look forward to the next stages of my life with books and reading to comfort me.”

And thus, we reach the end of our tale. The candles have burnt down to their last inch of the wick. Abandoned cups of tea have long gone cold, and you are beginning to think of the long journey waiting for you in the morning, the beginning of your next adventure. The fire is burning low, and the story is over. As you take your cloak back down from its peg and swing it around your shoulders, I hope you can now more readily appreciate those stories of magic and mystery, hobbits and heroes, spaceships and spells.

After all, what is life, if not the greatest kind of story?