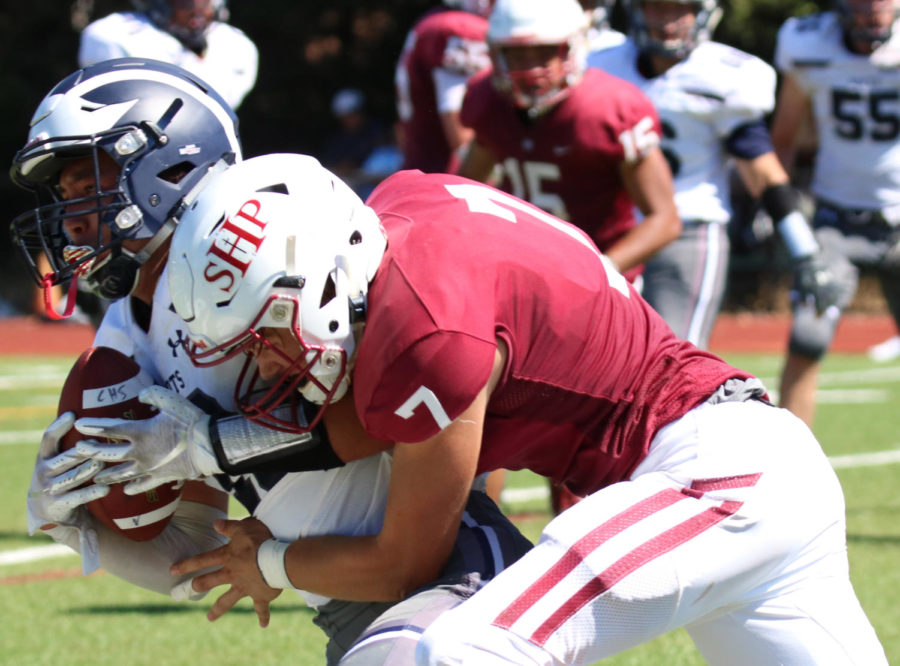 Carlmont defensive back Phillip Stav, a senior, is tackled by Cav Williams, an SHP junior, after completing a pass for a two yard gain. Carlmont's season opener ended with a devastating 28-7 loss on Saturday, Aug. 31.

When the Carlmont Scots started their season with a game against the Sacred Heart Prep (SHP) Gators last year, the Scots did not have a happy ending. Carlmont suffered one of their three losses last season to the SHP Gators by a 21-6 margin.

While many Scots entered Saturday’s game with confidence, history appeared to repeat itself as SHP’s offensive line began to put pressure on the Scots.

The only difference was that this time, Carlmont lost by an even larger margin, walking away with a score of 28-7.

The Gators took the lead in the first quarter with some effective offensive plays. Accurate throws from quarterback Teddy Purcell, a junior, and rushes by wide receiver Bryant Gavello, a senior, aided the Gators in gaining an advantage over the Scots.

Feeling the pressure as the Gators crept closer to the endzone, the Scots defense began to tighten up.

Despite recovering a fumble, the Scots continued to struggle as fullback Si’i Tengei, a junior, lost a yard for Carlmont. Unable to gain any more yards and with only seven minutes left to go in the first, Carlmont punted to SHP hoping to gain more breathing room.

But before the Scots could catch their breath, Purcell led the Gators’ offense once again, throwing a 37-yard pass completed by wide receiver Dante Cacchione, a senior, for a touchdown.

After a 7-0 first quarter, the Gators blitzed the Scots, leaving two unanswered touchdowns in the second quarter for the Scots.

SHP cornerback Connor York, a junior, felt confident throughout the game and believed the Gators’ strength lied in their offense.

“Our offense is really strong. We ran the ball very well, and our passing game was on too. We were firing on all cylinders,” York said.

Despite their struggle in the first half, Carlmont players such as Dane Fifita, a sophomore, refused to lose hope.

“We were doing good in the first half. It’s just that we fell apart as a team,” Fifita said. “But we’re going to come back stronger.”

With the score being 14-0 in the second quarter and SHP in the lead, the Scots’ defensive line began to close more gaps, sacking Purcell for a 10-yard loss. Frustrated, and on their fourth down with 21 yards to go, Purcell threw a 16-yard pass to Gavello who was cornered out into the sideline by Sam Cano, a junior.

Despite Carlmont’s defensive efforts, SHP running back Tevita Moimoi, a senior, eventually scored his first touchdown of the day. The second quarter ended with a score of 21-0.

Moimoi later ended the third quarter with another rushing touchdown widening the gap with a 27-0 lead.

Tevita Moimoi scores his 2nd TD of the day, extending the Gator lead to 27-0. pic.twitter.com/cD9GaXZdGV

It was only until the last quarter of the game when the Scots earned a touchdown, as Tengei completed Carlmont quarterback Timothy Netane’s, a sophomore, 13-yard pass.

Nonetheless, many Carlmont players remained optimistic after the game, noting that last year, they ended a 27-year playoff drought despite losing their season opener.

“We’re all just looking forward to the rest of the season and getting into playoffs,” said defensive back Jonaven Kuhn, a senior.

Despite suffering a 28-7 loss, Carlmont varsity coach Jake Messina is confident that the Scots will bounce back.

“[SHP] is a very good team, and they’ve got it together. They’re an A Division team, so we knew what we were going up against,” Messina said. “We had a few guys out this week that couldn’t play and that changes the game planning, but we did what we could, and I was proud of our guys.”