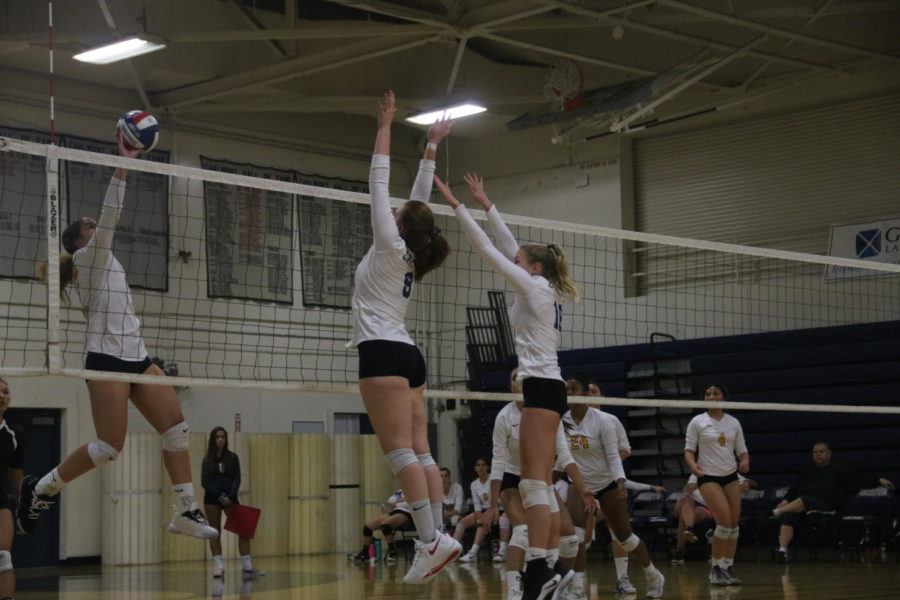 Nicole Olazar, a junior, and Valentina Yudin-Baehrle, a senior, block a hit from Terra Nova.

Although the Scots dominated the Tigers, the Carlmont players felt as though they did not play to their full potential.

When the team played Terra Nova in a scrimmage before the season, the Scots won easily. The difference in skill level gave the Scots confidence that they would win against Terra Nova in the coming season.

In preparing her team for the game, team captain Morgan McClellan said, “I understand that this isn’t our toughest competition, but we have to take it seriously. You can’t get too relaxed, or we will lose.”

McClellan’s predictions held true. In the first set, the Scots won 25-17 with their confidence, communication skills, and great hits. This set was an easy defeat.

In the second set, they were on a roll, and with confidence higher than ever, Carlmont beat Terra Nova 25-13. Now all they needed to claim the win was the third set.

It wasn’t going to be as easy they thought. The team was too arrogant, and the Scots let their guard down. They battled through a neck-to-neck third set. Neither team had the upper hand by more than two points for the majority of the set.

Everything changed at the end of the set. Carlmont pulled through in the last moments and scored five points, winning 25-20.

When asked about how the team performed in the third set, McClellan said, “We did not take it seriously and did not play to our potential in any way. It was horrible.”

McClellan further described how some individuals performed well, while others didn’t have their best game. Ultimately, the lack of synergy amongst the team is what led their very possible defeat in the third set.

Something that improved their performance throughout the game was the support from the team. Grace Xu, a sophomore, said, “The bench was really involved and cheered really hard for us. So that really helped our performance.”

When the cheers from the bench became too distracting, the team became less serious and resulted in a tight third set. The team was searching for a balance between being focused and being supportive of pulling a win every game.

The coach and the players agree that there is a lot to improve on. When reflecting on what the team can specifically improve on, coach Mike Lapuz said, “Consistency. As seen in the game, we let our guard down, and we have to learn to finish what we started.”

The players agree that they can be more focused even when they feel they are most confident.

Carlmont’s next game is against San Mateo on Sept. 26. The team hopes to implement focus and consistency on top of everything for their future games.