Carlmont helps save lives one pint at a time 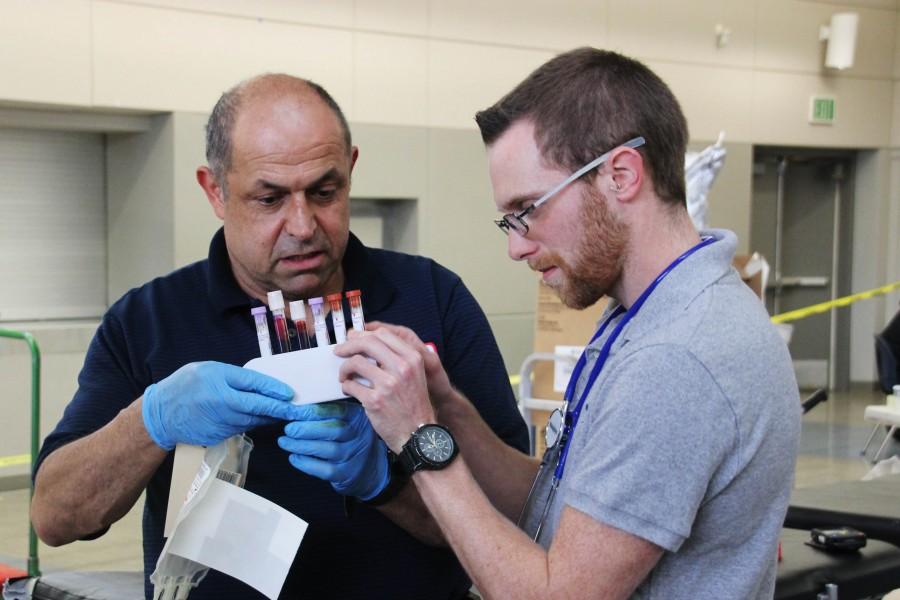 American Red Cross workers Dan Hernandez and Chris Hollenbeck check the blood samples that will be tested for diseases and blood type.

A student lies on the table waiting for the poke of the needle. Within 8-10 minutes after the needle penetrates the skin, the student’s blood is on its way to changing the lives of others.

On Thursday, March 10, 75 Carlmont students had blood extracted and donated to the Red Cross.

Carlmont ASB and the Red Cross have been collaborating since the beginning of the year to organize the 2016 Carlmont High School blood drive. ASB’s “Do Something” Commission and Human Relations Commission worked together to help make the blood drive possible.

“Most of the planning was done from the beginning of February until the blood drive, but we started planning all the way back in November,” said junior Matt Irwin, the “Do Something” commissioner.

In previous years, Carlmont raised 45 pints of blood; however, this year, Carlmont broke its record with 60 pints of donated blood.

“Donating my blood doesn’t take much from me, but it gives so much to other people,” said senior Kate Bryan.

Bryan participated in Carlmont’s blood drive for the past two years and continued to donate this year.

“I plan to go out of my way in the future to donate my blood because it can help so many people in need,” said Bryan.

The Red Cross has four different categories of blood that one can donate to: blood (whole blood), platelets, plasma, and double red cells. In order to be eligible to donate, one must be 17 years old or 16 years old with parental consent.

“Although I’m not 16 years old and not allowed to donate yet, I thought it was really cool how, as a school, we were able to help so many people who needed our blood. We were able to make a big impact on the lives of others,” said sophomore Shelby Young.

With every donation of blood Carlmont gave to the Red Cross, people across the world benefited.