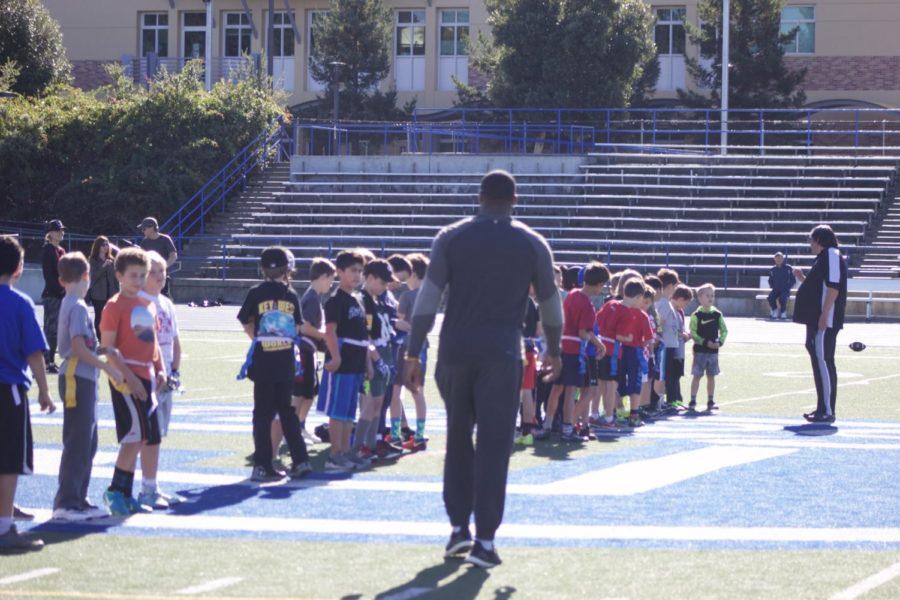 As the professional football season nears its end, many local seasons are just beginning.

On Sept. 18, YepSF hosted a free flag football clinic with former NFL player Kevin Greene at Carlmont High School to get kids interested in playing the sport. The organization will be running an upcoming flag football league starting on Jan. 21, 2018.

San Carlos Flag has partnered with NFL Flag for the past eight years and has hosted their games on Friday nights at Highlands Park in San Carlos. This year, they will be hosting games on Sunday afternoons at Carlmont High School.

This year, the league is being extended to high school aged players. YepSF/San Carlos Flag has also recognized that not all who play football enjoy tackle and they also encourage coed football.

The clinic started off with a speech made by Greene to get the participants inspired and energized for the clinic. There were around 60 participants total, ranging from ages five to fifteen.

The players cycled through four stations in groups of about fifteen based on their age. Each station ran different drills such as passing, guarding a receiver, and sharks and minnows.

The clinic concluded with a scrimmage game between each age group.

One station had participants line up with the football as though they were linemen defending the quarterback. The leader of the drill, Greene, acted as the center, or the person who snaps the ball to the quarterback.

“I participate in clinics like these about ten times a year,” said Greene.

Greene has played tight end on several NFL teams including the Bengals, Titans, Panthers, and the 49ers. He started playing football at the age of 17 at his high school Sacred Heart Cathedral Prep in San Francisco after being solely a basketball player. He continued through college at the University of Southern California where he graduated in 2013.

“I think kids should be getting off their couches and playing outside more,” said Greene.

YepSF/San Carlos Flag is thinking about holding another free clinic before the season starts and might be advertising in The Highlander, Carlmont’s school newspaper.

“I want kids to know that they don’t have to be the most athletic or the fastest to play sports,” said Greene.