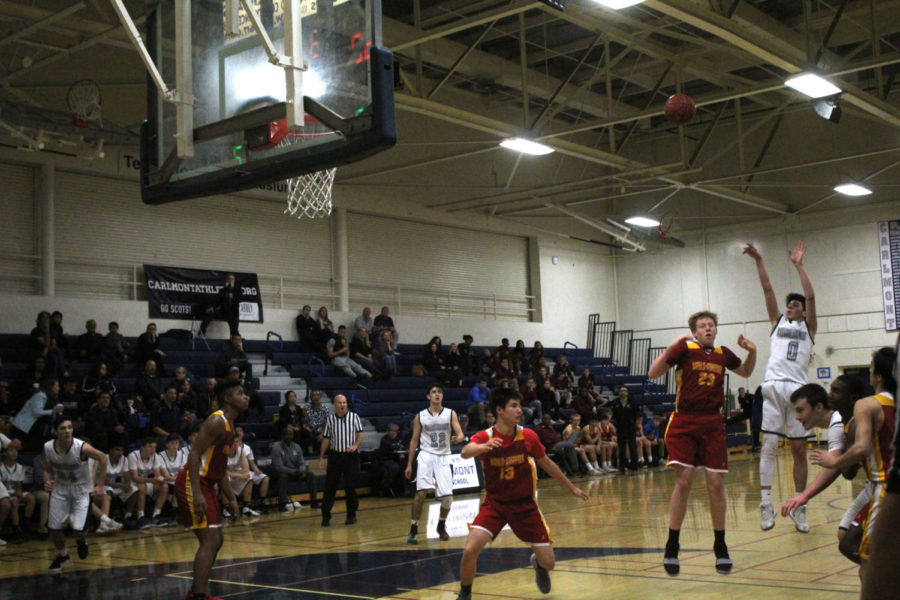 Carlmont’s JV boys basketball team suffered a 49-34 loss to the Menlo-Atherton (MA) Bears on Friday, never once taking the lead.

The Scots’ troubles began right away after MA won the tip-off. Each team missed a few shots until MA’s Rickey Martin sunk a basket. Carlmont would let up 8 points before finally scoring on a fast break more than half-way through the 1st quarter.

Shooting woes and mistakes continued for both sides throughout the remainder of the first quarter, and the Scots especially struggled to find a good cadence. Carlmont head coach James Jewitt wasn’t satisfied either, and called a timeout with 1:32 left in the first to regroup his squad. It didn’t do much as the Scots went into the 2nd quarter losing 14-6.

The Scots began turning things around ever so slightly. While only scoring eight points themselves, the defense played strong, holding the Bears to just five 2nd quarter points.

“We worked harder than MA, and our press forced them to turn the ball over,” said sophomore captain Alex Wong.

The Scots went into the locker room at half-time down 19-14, but spirits were much higher than they were after the end of the 1st quarter.

Coming out of the half, the Scots seemed like a new team altogether, playing with newfound energy bringing the score within three, all while shutting down MA defensively. This deficit was the closest the Scots would get to having a lead for the rest of the game.

Just as quickly as they pulled closer, the Scots fell apart. The Bears began pressing the Scots immediately after scoring, forcing multiple, consecutive turnovers on the inbound pass. The Bears capitalized on these turnovers, turning them into points and pulling away from the Scots for good. In this stretch, the Scots’ shooting problems returned resulting in the 3rd quarter ending with the Scots trailing the Bears 36-28.

“MA comes out hot every time they play us, as for us I think we just need to come out more focused right away,” said Miles Ozorio, a sophomore.

Things didn’t get much better for the Scots in the 4th quarter. Their defense fell apart and allowed the Bears to score 13 more points before the game concluded, defeating the Scots by 15, the final score being 49-34.

“We needed to communicate better and have better help on defense (late in the game),” Wong said.

Not everything went wrong for the Scots, however. The team shot 7-8 (87.5 percent) from the free throw line, which is exceptionally high compared to the average high school free throw percentage, which is estimated to be around 55-60 percent.

“Free throws are an essential part of the game, especially when you lose or win by small margins as they can help close or increase that margin,” said Ozorio, who sank all four of his free throws.

While 15 points is not a small margin, the Scots’ free throws were critical in helping them cut their deficit down to just three earlier in the game, but ultimately did not affect the outcome.

The loss was hard on the Scots, but will not prevent them from moving forward.

“The loss makes us want to win more because we hate how much it hurts to lose,” Wong said.