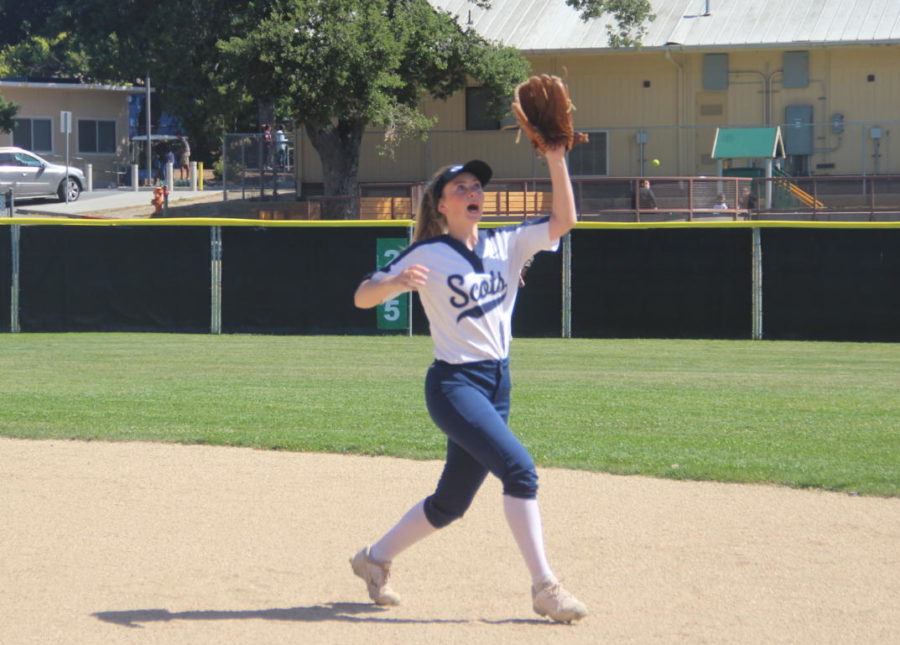 Dana Knoble, a sophomore, races to field the ball on a bounce.

The Carlmont Scots played the Saint Francis Lancers on Tuesday, April 30, which ended with the Scots suffering an unfortunate loss.

These two teams had already faced each other twice this season; the Lancers came out on top for the first game, but the Scots came back and won the second game. This most recent game was the third time they played each other, making it seem like a tiebreaker. Even though they are not rivalry schools, both teams desperately wanted to win.

“We have the confidence, and when the whole team just really wants to, you kind of know [that you’re going to win],” said Sophie Hai, a freshman, before the game. Unfortunately for Hai, her prediction was wrong.

The second inning was short but not sweet for either team. Neither made any headway, and only three girls from each team went up to bat.

Carlmont managed to stay ahead through the fifth inning. Blos bunted the ball, allowing for Lee to advance to third and eventually score.

However, in the next inning, Saint Francis caught up to Carlmont. Stephanie Kay, a freshman for Saint Francis, was the first to score that inning. Shortly after, both Luciana Moreland, a freshman, and Julia Bullock, a sophomore, scored, making the game tied.

Many of the players, both on Carlmont and Saint Francis, felt that the game was thrown off because of some unjust calls by the umpires, but both teams persevered.

“I know that the umpires were not fair with their calls, but I also know we could have done better,” said Dana Knoble, a sophomore for Carlmont.

With the score being tied, tensions on the field rose, as both teams hoped to score a run. In the last inning, Ella Milante, a freshman for Saint Francis, scored the winning run. The Scots were not able to come back after that run scored, ending the game with a score of 5-4 Saint Francis.

“I don’t feel like we lost. We prepare the girls to compete, and that’s just what they did. We made some errors that were uncharacteristic, but we’ll clean it up,” said Wesley Chong, head coach.