Carlmont opens its gates – expectations vs. reality of in-person school 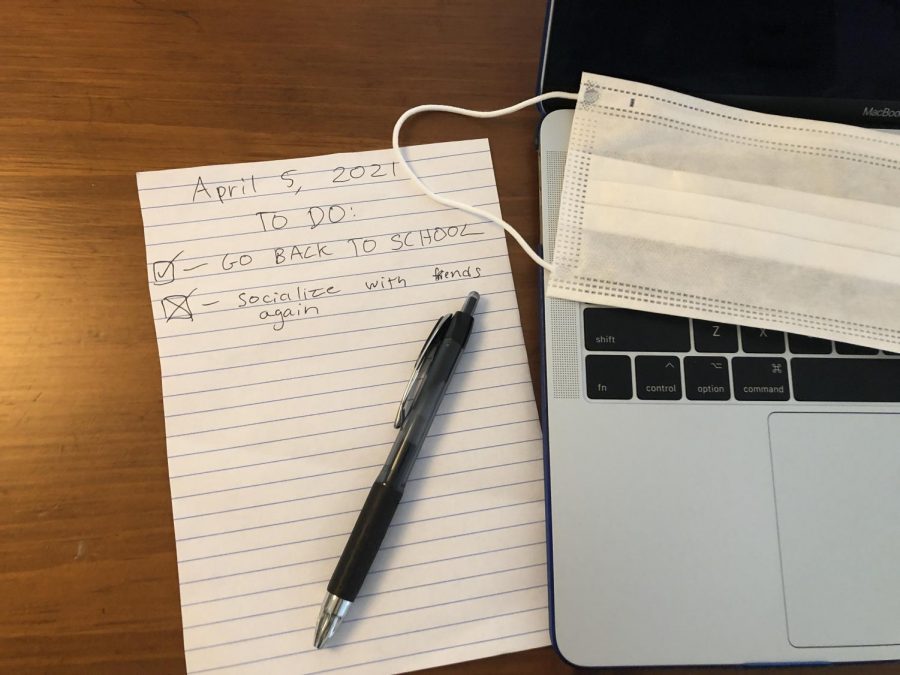 Carlmont's student body started to return to the classroom on April 5, 2021. However, it was different than expected. "I just expected it to be more social," said Talin Negandhi, a Carlmont sophomore.

Ever since mid-March 2020, school for nearly every student in the U.S. has been in front of a screen, completing assignments and video conferences from home. However, on April 5th, 2021, Carlmont High School opened its gates and reopened. While not all students chose to return to school, some did, and many teachers did as well. In this article, I will go over the expectations of how in-person schooling was thought to work and the reality of it, be it better or worse than the intended result.

Talin Negandhi, a sophomore, returned to school on April 5th. His motivation for returning to school: Better workflow and socialization. First of all, he expected more people to be going around campus. However, this wasn’t the case when he returned.

“I expected more people to come, and in many of my classes, I was the only one, or one other person was with me,” Negandhi said.

He also expected there to be more participation, interaction, and socialization with his peers and teachers. This was also not the case.

“They made sure I participated in class, but I was on zoom the whole time, and I didn’t really interact with my teachers as much,” Negandhi said.

Negandhi liked the fact that in-person learning helped him be much more productive, as there were not as many distractions at school as there were at home. But time-management-wise, he preferred learning at home. This is because of the various breaks and passing periods, which he claimed built up at home, providing more time to study and complete homework.

“I am motivated, but there are many times where I could be using my time more wisely at home,” Negandhi said.

However, even if there wasn’t as much interaction, there were still some benefits for Negandhi.

“One example was that I was in weight training, and I was the only one, so I got the whole gym to myself, but it was pretty lonely,” Negandhi said.

Another student, Nick Manning, a sophomore, also went back to school last week. However, for Manning’s case, his anticipations turned out to be somewhat correct, rightly inferring that there wouldn’t be too many people coming back.

“I expected not very many people to come because I had talked to other people, and it didn’t sound like a lot of people were going to show up,” Manning said.

He was right. According to Manning, not many people chose to return to school on April 5th, just 10% of the Carlmont student body, according to him. While his motivations for returning to Carlmont were mainly on the social side, this differed quite a bit at school, with the reality being less social than expected.

“A lot of the motivation for my return to campus was the social aspect and getting to talk with friends face to face. The lunchtimes are long enough to socialize, but you do have to eat within that time, and you still have to maintain social distance and keep a mask on,” Manning said. “So, in the off chance that you find a friend who’s in the same group as you, you may not have a lot of time to actually talk to them and socialize. So, options and social aspects are very limited.”

But those were only two student’s opinions. What do the teachers think?

“When I come back to class, how much new technology am I going to have to deal with? [Teachers aren’t] nearly as comfortable with technology and gizmos as you guys are,” said John Doe*.

To be more specific, they anticipated some difficulties with the synthesis of traditional and virtual teaching methods.

However, they did not expect many concerns regarding COVID-19 safety, as the school had put various safety measures into place. Due to this, they felt safe in those terms.

“I know that Carlmont does a really good job cleaning the rooms, and I know that all the teachers had been vaccinated, and I knew we’re going to be socially distant, so there were no COVID danger concerns for me,” Doe said.

However, the reality in terms of socialization was different than what the teacher had expected. There were very few students in their class the entire week, only one in each class period, and for this teacher, that did not seem worth it, with no benefit for students nor teachers.

“So, in terms of me driving all the way to Carlmont to teach one student in person, and that person has their screen open in front of me,” they said. “I think the idea is a bust; it doesn’t really work very well. It would make sense if six or seven kids were sitting in front of me, but the reality of it is, there’s only one student per class.”

Even though it did seem that the reality of in-person schooling was not as good as many might have hoped, there was still a light at the end of the tunnel, even for Doe.

“Being able to step up to the smartboard and write with a digital pen, it’s a lot more user friendly and easy to communicate with my students on a Smartboard than it is by using my mouse,” Doe said.

They also loved reconnecting in person with colleagues that they had not seen in a while. But other than these, the teacher saw few benefits.

“So again, what is the benefit to students? I don’t think it’s socialization, you know,” Doe said.

All in all, there seem to be lots of expected things that were not the reality at in-person Carlmont, such as the number of people present, the amount of socialization, and more. With some benefits, it might help some get back on topic and focus, with the sacrifice of more time. Should one go back to school? That’s for them to figure out, but be wary; it might not turn out the way one expects.

“Yeah, in reality, I expected more. But it helped me a lot,” Negandhi said.

*In accordance with Carlmont’s Anonymous Sourcing Policy, the name of the subject has been changed to preserve the subject’s identity.