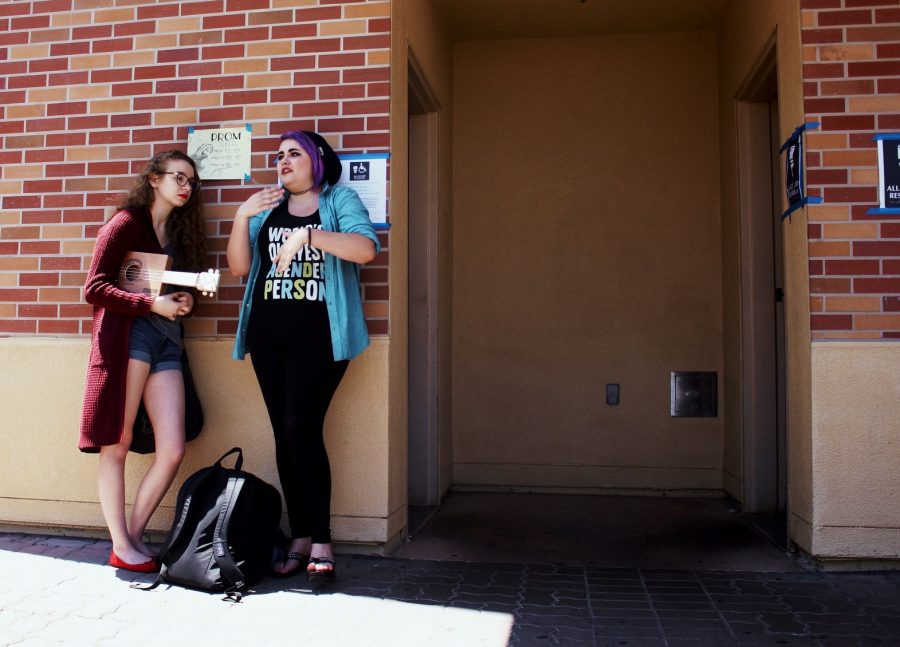 On Wednesday, May 26, the lower D hall bathrooms were transformed into “All-Gender Restrooms” with the combined efforts of Carlmont’s Gender and Sexuality Alliance (GSA) and the administration.

This change allows any person, regardless of gender, to use these bathrooms, enabling transgender people to feel more comfortable.

“I think it’s a major change for the people who identify differently from the gender assigned at birth, but a minor change for everyone else at the school. I think it is a great addition to our campus,” said freshmen Darian Dennler.

Transgender does not simply mean the transformation from male to female or vice versa. According to Merriam-Webster, transgender is being a person who identifies with or expresses a gender identity that differs from the one which corresponds to the person’s sex at birth.

At Carlmont, there are people who identify themselves as transgender.

In January 2016, Segal approached Principal Ralph Crame and requested a meeting to discuss the possibility of adding a gender-neutral bathroom to the campus.

“Prior to the meeting, I asked our vice principals to research schools that already had gender-neutral bathrooms on their campus. It was a great discussion with the GSA leaders and the administration team. We laid out all the concerns and brainstormed possible solutions. In the end, the students made a very convincing argument,” said Crame.

For many students, using the restrooms at school was not a possibility.

Senior Percival McDaniel said, “I am transgender, simple enough. For my first three years here at Carlmont, I waited until I got home to use the restroom. Every time that I used either one of the bathrooms, I get weird looks from people inside and outside the bathrooms. I could tell that they were disturbed by the fact that someone like myself was using the bathroom.”

Many transgender students at Carlmont, like McDaniel, have received negative comments when entering the bathroom of their choice.

“Before I came out as trans, I used the female restroom and a girl asked, ‘Why do you have to use this place? It’s not meant for you and your type.’ I replied with an inquisitive look and a shrug of my shoulders. ‘Why?’ she yelled. ‘Simple enough, I need to pee,’ I replied. She said, ‘Thats disgusting’ and walked out. Since then, the only restrooms that I have used on campus have been in the Performing Arts Center during shows. That is the only place where I feel 100 percent safe on this campus,” said McDaniel.

Crame believes that Carlmont has a very accepting student body that will embrace this and hopes that school can be a place where all students feel physically and emotionally safe.

On May 13, 2016, the Obama administration sent a letter to every public school district in the United States to allow transgender students to use bathrooms based on their chosen gender identity, or risk losing federal funding. This letter also discusses issues such as locker rooms and athletic teams.

Ravenelle said, “I think without the comments, everything seems fine. I just watched a cisgender person enter the bathroom and say, ‘I totally identify as a woman.’ People don’t understand what they are saying can come off as rude. If people are going to use it as a bathroom and nothing else, then it’s fine. If they are going to treat it like it’s a portal to another world, then it’s obnoxious.”

For those who feel uncomfortable with this new addition to campus, there are still multiple bathrooms on campus that are available.

As of now, Carlmont will continue to have the gender-neutral bathrooms.