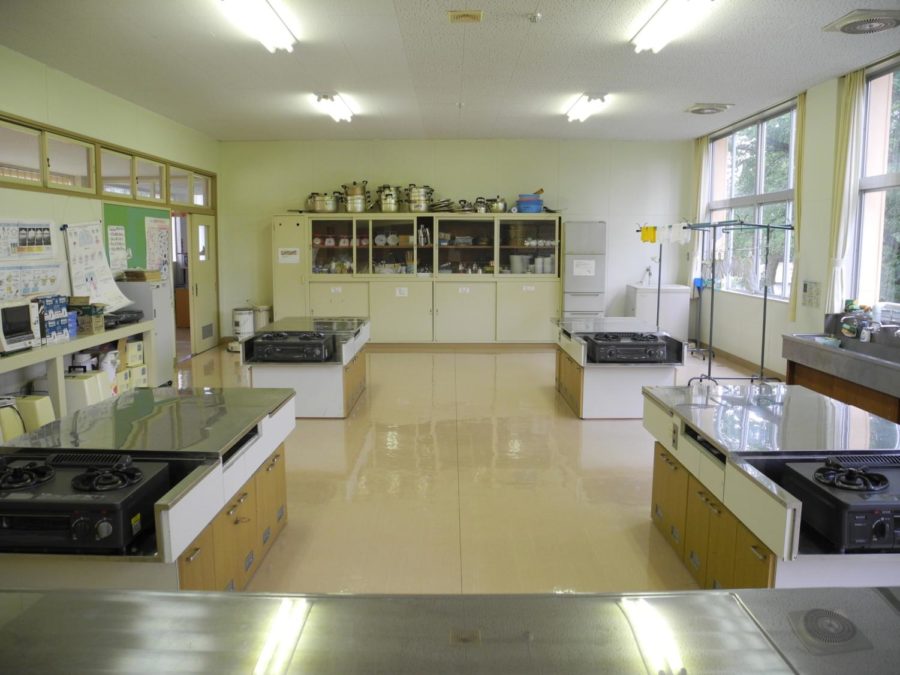 A kitchen classroom in Japan.

State funding applications for a new classroom construction project sent out by the Carlmont administration are pending review as the school continues plans to develop a new CTE Food Service and Hospitality pathway program.

The Career, Technology, and Education pathway focusing on the field of culinary arts and emphasizing career readiness will involve a structured sequence of three courses. Introductory, concentration, and capstone level courses will teach from basic food preparation to food safety and sanitation and give students chances to earn community college credit and even ServSafe certifications. Its curriculum will be based on standards set by California’s 2013 revised CTE Model Curriculum Standards.

“This is a CTE pathway that we think will be highly interesting and popular for students, and we think it will be beneficial as far as skills learned,” Carlmont Principal Ralph Crame said.

The plans call to convert three smaller classrooms in T-Hall into one large food preparation lab for the Food Service and Hospitality pathway classes. The new classroom will have a teaching station up front and eight food preparation stations, closely resembling the setup of existing U-Hall lab classrooms. Initial rough estimates put the total of the expansion, renovation, installation, and equipment costs at upwards of $3 million.

Crame is hopeful the pathway classes will be ready to be unveiled and available to Carlmont students in the 2020–2021 school year if their funding requests submitted to the state are approved.

California allocates millions for CTE facility grants to be awarded to its public schools under the Proposition 51 CTE Facilities Program. In each annual funding cycle, the state has limited allocated funds for the program, and naturally can only select a number of projects to fund, matching approved funding 50–50 with the site’s local school district. To determine the projects that will be approved in the competitive grant process, the Department of Education takes into consideration the score they issue to the application and the project’s locale (Carlmont is listed as Suburban).

Carlmont’s funding application scored a 124.5 out of 141, advancing from the preliminary round that disqualified all projects scoring lower than 105, and ranking 99th out of the 211 qualified projects submitted to the state.

According to Crame, the school will likely hear back whether they will receive the grant or not in around April or May of this year. The school plans to reapply for the program in the following year’s funding cycle if the state turns them down. Aside from reapplying for the state grant if the project is turned down, the only other chance at receiving funding for the CTE pathway would be through bonds from local ballot measures.

This submission in the 2019 CTE funding cycle marks the administration’s first attempt in seeking funding for this project.

A CTE advisory committee made up of Carlmont staff, SUHSD office staff, industry partners, community college partners, and feeder school partners are also involved in the planning of the program. The career readiness focused project has gained the attention of local businesses interested in offering internship and hiring opportunities, like the Waterdog Tavern, whose owner, Toby McMillen, is an industry partner on the committee.

“It’s a competitive industry that I think would be of interest for students,” Crame said. “[It] gives hands-on skills up to the industry standards. They’re getting real experience to be prepared to go out into the workforce.”

Crame says he has begun sending the word out to Carlmont instructional staff about the position in case some may consider teaching this CTE pathway. Carlmont teachers interested in applying would likely have to gain additional credentials to qualify.

Rich Vallero, Carlmont varsity baseball coach and physical education teacher, expressed interest for the teaching position and was enthusiastic about the program itself. He believed it was important to teach students skills promoting self-reliance and how to take care of themselves.

“I think [the courses] are something that’s needed in this day and age; kids are becoming more accustomed to parents doing everything,” Vallero said.

Through high school, Vallero was passionate about the culinary arts, almost taking a scholarship going into the field.

Carlmont students showed fair support for the introduction of the program, too.

While not personally interested, Jon Standlee, a sophomore at Carlmont, approved of the new classes.

“I can see the appeal, and why students would want to take it,” Standlee said. “It seems like a great course to have at Carlmont.”

“With all the other classes I’ll have, I probably could not, but, ideally, I would like to take it. I think it could be beneficial because students do need to learn how to cook in life,” Leung said.