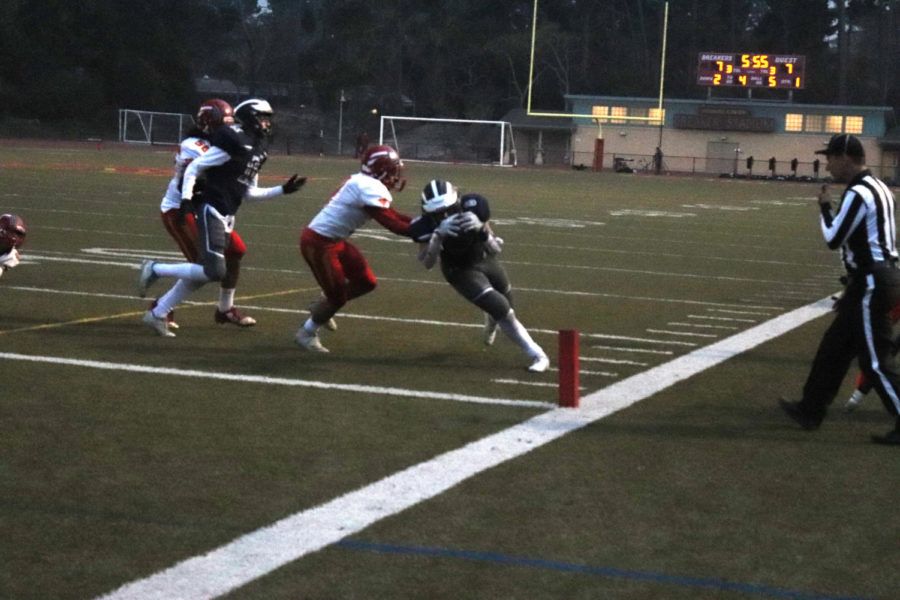 Running Back Julian Morin, a senior, dives into the end zone for a touchdown.

While any playoff victory is significant, this one was even bigger for the Scots. The win marked the first time since 1991, nearly 28 years, where the Carlmont football team won a playoff game.

The game was initially scheduled to be played on Nov. 19 at Willow Glen but was forced to be rescheduled twice due to the fires and poor air quality ravaging California. The Scots were unfazed by this long rest time and extended their win streak to nine games.

The Scots got off to a slow start, however, and punted after posting a three-and-out.

The Scots defense held strong holding the Rams senior running back Tyler Hawkins to three yards and stopping the receiver short of the first down. The Rams went for it on fourth down and converted it on a rush by Hawkins. A few plays later and the Rams were threatening deep in Scots territory. Hawkins took the handoff inside the Scots 25 and fumbled the football. The Scots defense immediately pounced on the ball and took over on their 18-yard line.

After the Scots gained the first down with three consecutive rushes, sophomore quarterback Siupeli Netane was sacked by the Rams Isaac Munoz, a senior, for a loss of five yards. The Scots attempted a trick play on third and 14 but failed to convert and were forced to punt yet again.

The refs called a holding penalty on the Scots during the kick, so the Rams elected for a re-kick.

The Rams immediately got inside the Scots 10-yard line after a 29-yard catch by wide receiver Michael Malvini, a junior. The Rams would go nowhere after the reception as Hawkins had the ball ripped out of his hands and stolen by Holmes who would be brought down on the 3-yard line.

On the first play of their drive, Kuhn fumbled the football, and the Rams recovered it on the Scots 4-yard line, setting them up with a very short first and goal.

Rams running back Jake Medina, a junior, rushed for a 4-yard touchdown and the PAT was good, giving the Rams a 7-0 lead with 1:37 to go in the first quarter.

The Scots started their drive on the 35 after the Rams kickoff went out of bounds drawing a flag. The Scots worked quickly and gained a first down on their 46-yard line. Netane handed the ball off to Kuhn who burst through some holes and outran the defense on a 54-yard touchdown. Nico Franchi, a senior, made the PAT which tied the game at seven apiece with 46.6 seconds left in the first.

“We did well hitting the holes, and our blockers did really well getting the blocks thrown,” said Kuhn regarding the Scots’ breakout plays on offense.

The first quarter ended with the Rams getting a 1-yard rush. When play resumed, the Rams faced a fourth and one but failed to convert it, turning the ball over on downs.

Morin gained eight yards on his first rush but failed to gain any more on his next two bringing up a fourth and one for the Scots. They converted with a 12-yard rush by Jayden Kuhn, a senior, but it was called back because of a Carlmont holding. The Scots were still lined up to go for it on fourth and 11, but a false start penalty pushed them five yards back and forced them to punt.

The Rams called for a fair catch at the 11, and the Scots held them to a three-and-out and received the punt.

The Scots received the ball with excellent field position on the Rams 33-yard line. The Scots got things heated up with a 22-yard rush and followed with a 6-yard rush to the 5. Morin then preceded to dive into the end zone for a 5-yard rushing touchdown. Franchi’s PAT was good giving the Scots a 14-7 lead with 5:52 left in the first half.

The Rams started to piece a drive together with a 21-yard catch by Malvini, but penalties and strong defense by the Scots forced a turnover on downs and takeover by the Scots.

They were not able to do much as Morin intercepted the Rams quarterback a few plays later.

The Scots ran the clock and punted away giving the Rams the ball with 2.7 seconds remaining in the first half.

The Rams kneeled, ending the half.

At the start of the third quarter, the Scots kicked off to the Rams and returned the ball to the 43-yard line. On third and 12, the Rams screen pass fell incomplete, and they were forced to punt the ball away.

The Scots drive went nowhere, and they punted the ball right back to the Rams.

Hawkins started the drive with a 2-yard rush, and a passing interference call on the Scots gave the Rams a first down. The starting quarterback, Isaiah Basurto, a senior, kept the ball himself but was tackled for a loss of three yards. The Rams were unable to get the first down, so they punted away, a punt which Jonaven Kuhn returned 66-yards for a touchdown, putting the Scots up 21-7 with 7:27 left in the third quarter.

“I think it made the other team think they were overpowered by our team,” said Jonaven Kuhn on the effect of his big score.

The Rams got the ball back quickly but were forced to punt yet again. However, the punter fumbled the ball and the Scots recovered at the Rams’ 25.

The Scots scored immediately on a 24-yard run by Simon Tara, a senior, adding seven more points to their lead.

The Rams called a timeout on the ensuing drive with 5:08 left in the third. The Rams called for some trickery with a hook-and-ladder, but it only gained five yards. The Rams went for it on fourth down but failed after the Scots sacked the quarterback.

The Scots ran out the clock to end the third quarter, and retained possession of the ball at the start of the fourth quarter. They went for it on fourth down and converted on a rush by Morin. The Scots were driving, but the Rams intercepted Netane’s pass in the end zone.

The Rams were backed up deep in their own territory and were unable to go anywhere. On the punt, mayhem ensued, and the referees threw four total flags, three on Carlmont, one on Willow Glen. Three of these penalties were dead-ball penalties, including one on a Carlmont player for picking up the referee’s hat and placing it on top of his helmet, mocking the ref.

“You just have to play through them, [the refs] just start throwing them at you and you need to get passed them. It’s playoff football. It’s not always going to be pretty,” said head coach Jake Messina regarding this surplus of penalties.

The Rams were awarded 15 yards and gained an automatic first down. Holmes intercepted Basurto’s pass, and the Scots took over possession of the ball.

“Honestly, every one of our linemen is a beast. They have a high motor, high intensity every play, and they just bring it every game and ball out every down. They cause problems for the quarterback and without the D-line getting in there and pressuring the quarterback, the secondary wouldn’t be able to get those picks,” said Holmes on how the defense was able to create so many turnovers.

The Scots then ran out the clock and went for it on fourth down, but freshman Dane Fifita fumbled the ball, and Willow Glen recovered it.

Willow Glen ran the ball as the clock wound down to zero, effectively ending the game and giving the Scots the victory.

“It’s great for the school, and I’m really proud of the kids and their effort. It was pretty amazing,” said coach Messina on Carlmont’s triumph.