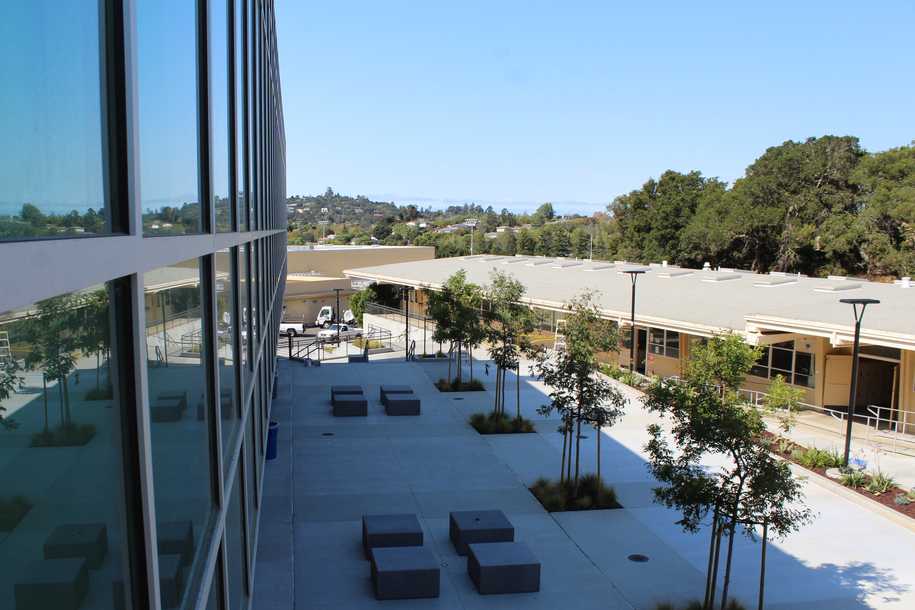 On the second level of S-wing, students can relax and eat lunch in the outdoor lounge area.

Before the beginning of the 2017-2018 school year, the construction of Carlmont’s new S-wing was completed, and 10 new classes were opened for teaching.

Although completed behind schedule, this new facility has officially opened.

“It was a three-year project from planning [S-wing] to completing it. The original completion date was spring 2017 and we finally moved teachers in just before fall 2017. The cost ended up at about $17.5 million,” said Principal Ralph Crame.

This new S-wing consists of six general use classes, three science rooms, and one photojournalism classroom.

Crame and Carlmont administration decided to move six world language teachers into the six new general use classrooms to keep teachers of similar subjects close together.

In the process of moving from T-hall to S-wing, many teachers received help from Carlmont custodian Jerome Harris.

World language teacher Roberta Scott said, “I am so grateful for Jerome Harris and his team for helping me move hundreds of items to my new room. I would have never made the transfer without him.”

According to many of the teachers who had previously taught in T-hall, moving to these new classrooms is an upgrade that will improve their teaching and overall experience at Carlmont.

Scott said, “One of my favorite parts about the new room is the air conditioning, which saved us during the last heat wave. I had spent 10 years teaching in T-hall, and we have way more room to move in S-wing rooms because of the larger floor plan. I also love the trees and bushes that we get to see [in S-wing], instead of just cement trucks, bulldozers, and construction debris.”

In addition, teachers prefer S-wing rooms over their old rooms due to the benefits that it provides for students.

Spanish teacher Carly Gatzert, who used to be in T-hall, said, “I prefer to be teaching in S-wing because the classrooms are brand new; they have ample storage space and large whiteboards throughout the room. We will also have Chromebook carts to use with the students and collaborative desks for students to easily work in pairs or groups.”

The new classrooms in S-wing also include built-in microphone systems.

Elena Moore, a sophomore, said, “[The microphone system] is really helpful especially because my teacher has a soft voice, so it is easier to hear and understand her. The students also like it because they can use it to answer questions and do presentations.”

The top floor of S-wing also features an indoor lobby with new furniture specifically designed for group discussions and relaxing.

Crame said, “The inspiration for the upstairs lobby collaboration space and furniture came from new college campus designs. The idea was to make [S-wing] feel more like a college.”

There have been a few minor problems with the new S-wing classrooms, and some teachers are encountering trouble with the layout of the rooms.

Scott said, “In the new S-wing classrooms, the computers and telephones are located the furthest point away from the SMART Boards. This is an issue because the SMART Board is where I teach, so it’s very inconvenient for me.”

However, after fixing the minor issues inside S-wing classrooms and around the building, teaching in this part of campus should be smooth and effective.

Gatzert said, “There are currently some problems with some of the new equipment in the S-wing, but when all of those issues are worked out, I believe my classroom will be better equipped than T-hall.”

Despite these issues in the new building and its facilities, the addition of S-wing to Carlmont’s growing campus has improved the learning environment for many students.

Moore said, “I love having classes in S-wing because a majority of the building is made of windows, which makes the area appear very open and clean. I also love the courtyard directly outside the classrooms because it’s convenient to sit there and relax.”