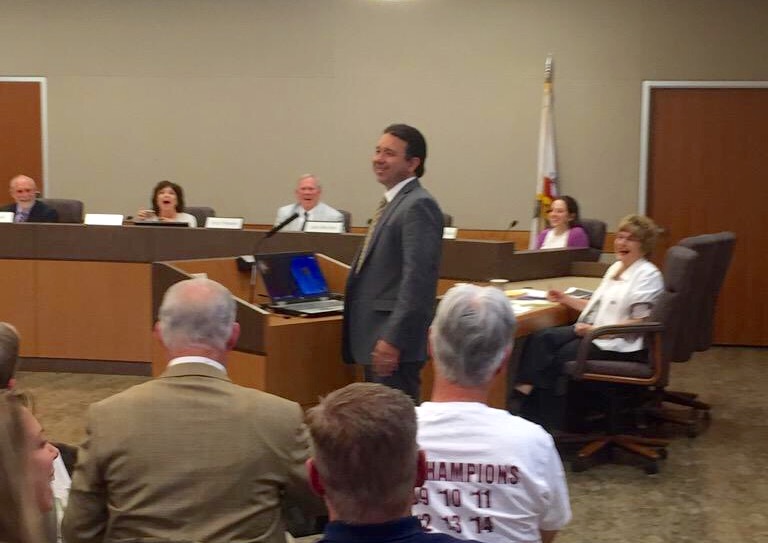 Ralph Crame, Carlmont’s former instructional vice principal, was announced as Carlmont’s new principal this week after Lisa Gleaton stepped down to restart as a teacher, which will allow her to spend more time with her husband during his fight against cancer.

The selection process was thorough, with staff, parents, and students contributing to the decision that Crame would be the best fit for Carlmont.

Although they were sad to see Gleaton go, many members of Carlmont’s staff expressed their excitement about Crame’s appointment as principal.

Jim Kelly, ASB teacher and member of the interview panel, said, “In the eight years that he’s been here, he’s been a teacher, administrative vice principal, instructional vice principal, etc. He always displays a leadership style that is hands-on and very motivating, and he’s been integral in helping to grow the school and especially the leadership program, so there’s no doubt that he’s capable of continuing this growth as our new principal.”

Many students also supported the decision.

Senior Alenna Winfield said, “I’m super excited for Crame to be the principal. I know he has great things in store for the students here at Carlmont. Since I’m a senior, I’m sad that I won’t get to see the changes as a student, but I know that when I come back to visit, he will have great things going on.”

Amongst all the positive reactions, Crame feels ready to take on the role of principal. As with all of his other jobs, he will lead Carlmont with a sense of spirit and motivation.

He said, “I feel extremely fortunate to be selected as Carlmont’s new principal. Carlmont has a tremendous staff and an outstanding student body where I feel at home.”