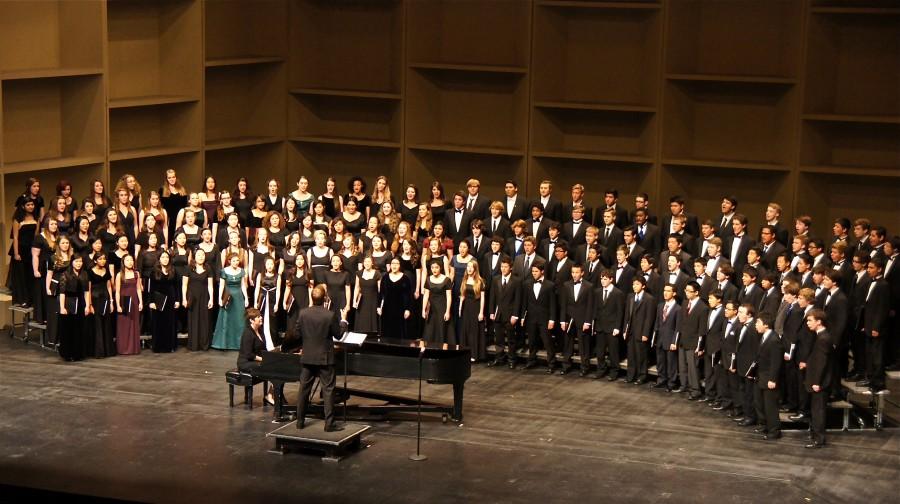 The 340 all-state participants were selected based on their scores from regional honor choirs. The top third of regional scores qualified to go to Sacramento.

Carlmont had students in each of the three all-state honor choirs: four girls in Women’s Choir, four boys in Men’s Choir, and two boys and one girl in Mixed Choir.

The participants received their sheet music two months before the all-state weekend.

Senior Miles Coe, who performed in the All-State Honor Mixed Choir, said, “You’re expected to know your music fairly well before you get there.”

“If they’ve gotten into all-state they don’t really need much help preparing. I just helped them for the most part with the foreign language pronunciation if they needed it,” said Carlmont Choir Director Genevieve Tep.

Before beginning rehearsals, the all-state participants were tested in groups of eight to make sure they had learned their music.

Sophomore Jason McGee of the All-State Honor Men’s Choir said, “We rehearsed for 15 hours and learned eight pieces of music in no time. It was very fast.”

From Thursday morning to Saturday evening, the only breaks from rehearsal were for sleeping and eating. After a dress rehearsal on Saturday morning, the performance started at 2 p.m. and lasted two hours.

Sierra Segal of the All-State Honor Mixed Choir said, “We were in a beautiful auditorium, and just standing up on the stage with all these incredibly talented individuals made it clear that it had been worth the work.”

The participants also worked with renowned conductors, including Joshua Habermann for the mixed choir and Dr. Z. Randall Stroope for the Men’s Choir.

Habermann, currently the director of the Dallas Symphony Chorus, was the assistant conductor of the San Francisco Symphony Chorus for over 10 years. Stroope has directed 37 all-state choirs and 12 international music festivals throughout Europe.

Coe said, “These conductors are top-notch. Habermann did a fantastic job keeping us professional and visually connected with him. He had his own vision of how the songs should be, and he created that with us.”

In addition to working with guest conductors, Carlmont’s representatives sang with hundreds of other top-rated choir students from all over California.

Segal said, “One of the best parts for me was getting to know all these people who are just like me — choir nerds. We had so much fun together, and I’ll never forget the friends I made. The whole thing was intense, tiring, and a little crazy, but it was one of the best experiences I’ve ever had.”