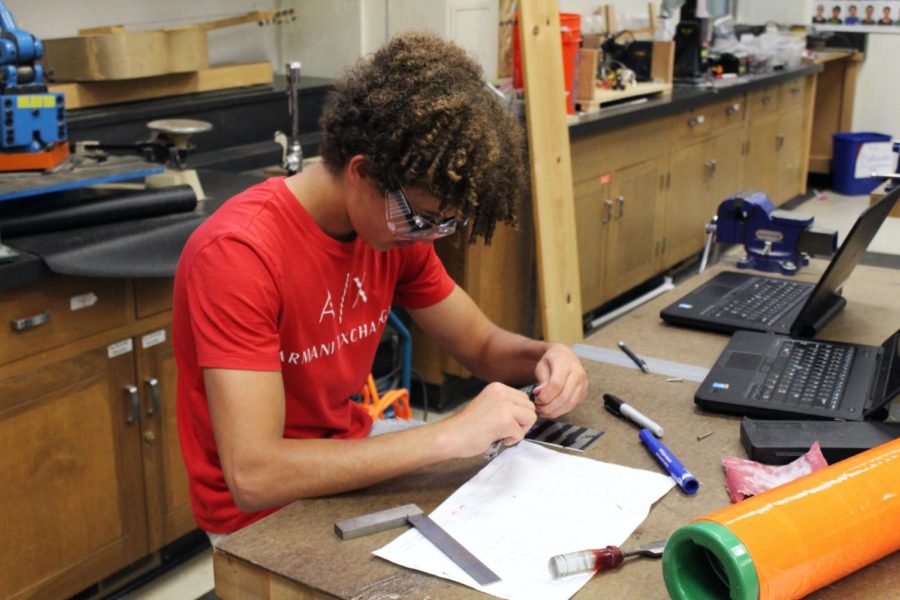 Abdel Zaro, a sophomore, designs a part for the robot.

Robocop, Wall-E, Optimus Prime, and R2-D2 — all famous robots, yet none is as real as the robots created in the Carlmont Robotics’ workshop.

The Carlmont Robotics team, also known as Deep Blue, is an organization of students from freshmen to seniors who work together on a yearlong project. Starting in the second semester, Robotics members work to complete a yearly task and prepare for their robot to appear in competition.

“We have 6 weeks to build a robot [called the ‘build season’] during the school’s third quarter in which our entirely student-led team works to design, fabricate, program, wire, and test the robot,” said Kevin Wang, a junior and co-captain of Robotics.

Once the team arrives at the competition, they work to finalize their project and prepare it for presentation.

“At competition, the finishing touches are put on the robot and enhancements are made based on the performance in actual play,” said Ian Weissburg, a sophomore.

The stakes of the competitions are high, as there are many potential titles the team can win.

“Competitions happen during the weeks after build season. [In the competitions,] we play matches against other teams and compete for other awards and for the chance to get into the World Championship,” Wang said.

In addition to competitions, Carlmont Robotics also makes appearances at various events around the Bay Area.

“We also hold community service events at places like Maker Faire and Save the Music, as well as visiting elementary schools to teach about science, technology, engineering, and math,” Weissburg said.

“On the robotics team, I am currently overseeing the electronics and pneumatic design and the construction of the robot,” Weissburg said. “[Along with] the control systems of the robot, I also work on the fabrication of parts, and all members are a part of the strategy and conceptualization of the robot.”

In addition to strengthening technological skills, Robotics also allows members to build life skills such as communication and team-building.

“In Robotics, you get to learn new business skills and technical skills. It teaches you a lot about leadership and dealing with people. You also get to meet a lot of new people from all over the place and gain new experiences and ideas from them,” said Chloe Stanks, a junior.

Building a robot requires strong teamwork and dedication. The members of Robotics strive to not only create a successful robot but to also bond and form lasting relationships with others.

“Without every aspect of our team… we would not be able to fully build a robot,” Stanks said.