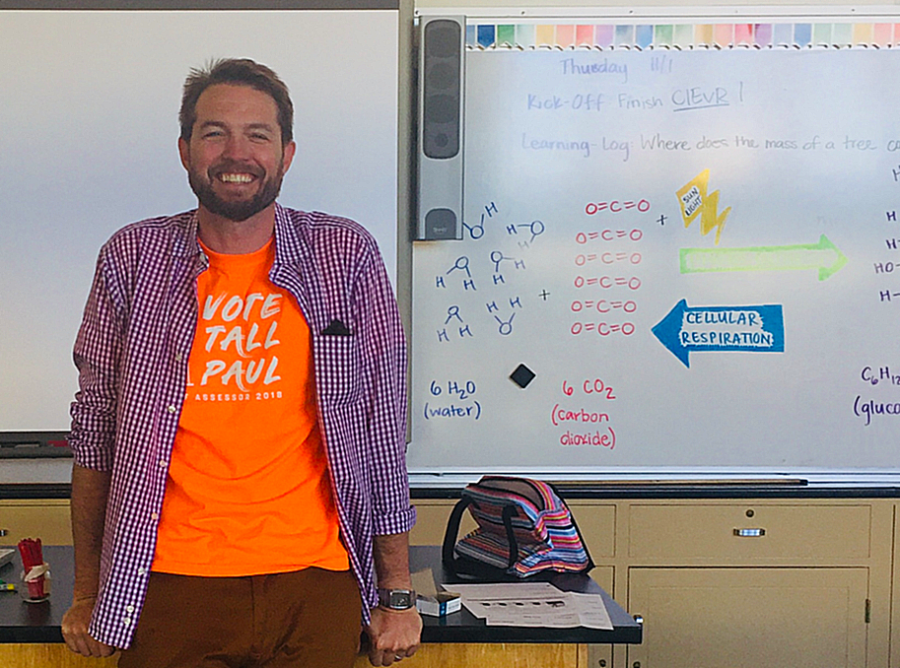 Science teacher Paul Bellar runs for the position of Assessor-Recorder in San Francisco.

Running for the position of Assessor-Recorder in San Francisco this year is Paul Bellar, a science teacher in the Sequoia Union High School District.

The office of the Assessor, or Assessor-Recorder, accounts for taking all the property in the county, applying the tax law to it, and letting homeowners know the amount of taxes they owe.

This property tax later comes to support institutions such as schools — which would lack funding without it — as well as to pay teachers, police officers, and nurses.

The position of the Assessor is one of the most important in the state since they fulfill these roles and obtain key information about said properties.

However, in San Francisco, the importance of the Assessor has gone unnoticed.

In 2015, a civil grand jury ranked the office of the Assessor-Recorder last in the entire state of California.

Due to mismanagement, inaccurate statistics have been collected on housing, and citizens of the San Francisco County were either not notified of their taxes or were paying incorrect ones.

These struggles further contribute to a lack of understanding about the Assessor’s role, which Paul Bellar hopes to rectify if he wins the vote.

Bellar teaches Biology and Human Biology at Carlmont High School and attributes his background in education to be a major factor when shaping his campaign.

“Nobody knows what the Assessor does, so you’re inherently trying to let people know about the position,” Bellar said.

His students, such as senior Brisilia Lozano, have voiced their support.

“He’s really good with his words, so I think he will get the position and everyone’s votes,” Lozano, who has Bellar for Human Biology, said.

With nine years of experience in housing and his work with the Assessor’s Office data, Bellar is the prime candidate for the position.

However, the issues that surround housing are more complex than what at they first appear.

In a place such as San Francisco, owning property often becomes too much to afford — the median sales price of houses in the city increased by nearly 136 percent since the first quarter of 2012, according to Bay Area Market Reports.

“I come from working-class poverty, and I see a lot of people in San Francisco going through a similar experience,” Bellar said. “It’s not because they’re overly poor, it’s because housing is so expensive they’re barely making it.”

This can further contribute to homelessness, which is, as illustrated in Bellar’s campaign video, one of the most prevalent issues to come out of the housing crisis.

The amount of homelessness in the United States overall rose by 1 percent between 2016-2017, and 68.2 percent of California’s homeless population has been left unsheltered.

However, California’s struggles with housing do not end there.

Issued in 1978, Proposition 13 declared that all properties assessed in the state at the time of their first being bought would have the same property tax until ownership shifted.

“Prop 13 has created a system in which new homeowners pay 10-20 times more than their neighbors, whose property has like value but was attained long ago,” Attorney Gary Wesley wrote.

Consequently, schools that operate on property taxes are being insufficiently funded, as the tax on a home bought during the time of Prop 13 is inadequate compared to what would be paid if that home were bought today.

Bellar said, “Prop 13 has gotten so bad now, where it’s not just taxes anymore — it’s become an entitlement, where you’re entitled to the property tax that you had when you bought the home.”

Earlier in February, anti-homelessness organization Housing California initiated a campaign for Prop 13 to be overturned by 2020, increasing property tax revenue by an estimated 6 to 10 billion.

This proposal, known as a split roll, intends to set taxes on property based solely on their market value as assessed every three years.

In Feb. 2018, the organization stated that, “After paying for county administrative costs and backfilling state income tax losses related to the measure, the remaining $6 billion to $10 billion would be allocated to schools (40 percent) and other local governments (60 percent).”

Despite the many setbacks that the county is facing on both property taxes and housing, Bellar is ultimately hopeful as he campaigns to take on the position.

Bellar said, “We want to have an all-encompassing, welcoming city.”