Scots dominate game and end with a win 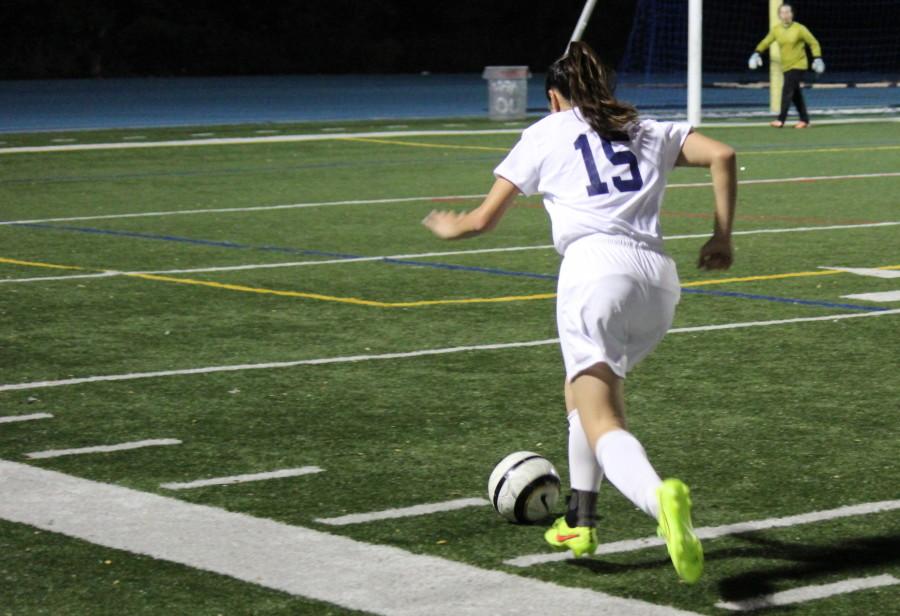 Freshman Kaylee Leong (15) runs down the sideline to cross the ball.

The Scots won another pre-season game against the Terra Nova Tigers last night.

The JV girls defeated the Tigers on Nov. 30 in a game that was completely dominated by the Scots. With a strong attacking side, and a solid defense, Carlmont was able to tackle the Tigers in a 3-1 win.

At kickoff, the Scots started with high pressure, causing the Terra Nova defense to make mistakes. In the first three minutes, Carlmont was able to get a shot off on frame.

Ten minutes into the first half, an aggressive Carlmont player, junior Paris Bartolo, was fouled by an outside defender in the midfield. With a quick restart, Bartolo was able to get off a cross directly to the feet of freshman Kaylee Leong, who placed a volley around the goalie into the back of the net to make the score 1-0.

“Our team was playing extremely well with each other. We were able to make little plays, and get off many shots. This ultimately caused us to score our goals,” said Bartolo.

In the midfield, Scots sophomore Sofia Tam was doing well creating plays. Right from the Tiger’s goal kick, Tam took the ball off the defender, and sent a through ball to the feet of Leong. Leong dribbled the ball down to the corner flag, and played an easy ball on the ground back to Tam, who chipped it past the keeper, changing the score into 2-0.

Although the Scots were pressuring the forwards on Terra Nova, Carlmont were not communicating well enough, and Tigers sophomore Milla Tivadar put in a chip to the top left corner to end the first half with a score of 2-1.

The second half started like the first; high pressure from Carlmont and many chances from the forwards. Forwards Leong and Bartolo played well with each other, creating many opportunities with one another.

“Our team did play well, connecting passes at most times. We can definitely work on communicating with each other; I believe that is why we got scored on in the first half,” said Tolu.

After the game, the girls cheered with each other over their victory and shook hands with the opposing team.

“Overall, we played well but still have a lot of work to do in practice. During the game, we did not communicate well enough and we weren’t connecting passes. Most of the time we were kicking the ball for no reason,” said Scott Pendleton, the coach of the team.