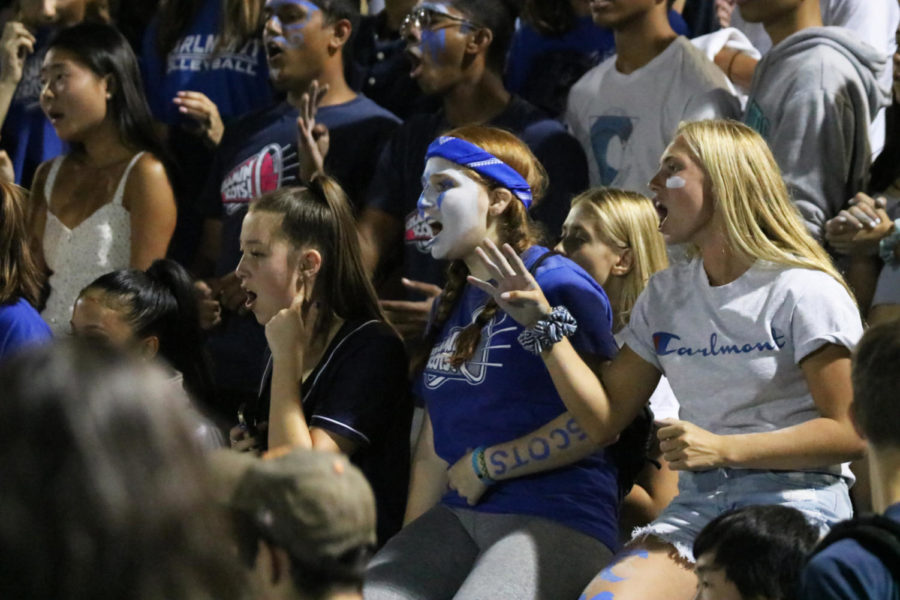 Hundreds of students lined up along the bleachers, cheering for the Scots in blue and white face paint and glitter. Friday was Carlmont's first home game of the season and with a final score of 69-19. The win also marked the second consecutive victory for the Scots.

Friday the 13th has always been rumored to bring bad luck.

For the Independence 76ers, the old superstition rang true. They walked away with a crushing 69-19 loss.

Going into the game, the 76ers were hopeful that they could snap their two-game losing streak. However, having several injured players and knowing they would be facing a strong Scots team, wide receiver Puneet Singh knew that to break that streak, they’d have to give it their all.

“We have a lot of injured players and since we knew how Carlmont was last year, we knew that this game was going to be tough,” Singh said.

The Scots were on fire right out of the gates. Less than five minutes into the first quarter, they had already taken the lead with a 10-yard rushing touchdown by running back Jonaven Kuhn.

While the 76ers were determined to bounce back, the Scot’s defensive line forced them into a turnover.

And after a 10-yard gain by Kuhn, quarterback and Scot Timothy Netane had luck on his side.

As Wes Brown slipped through the 76ers defense, Netane quickly threw a 20-yard pass which, when completed by Brown, earned the Scots yet another touchdown. The lead was now  14-0 Carlmont.

Watching from the sidelines, defensive back PJ Stav was proud of his teammates’ performance.

“I think there’s always room for improvement,” Stav said. “But I think it was really awesome watching them work really hard and I think they deserve it.”

With less than five minutes to go in the first quarter, the Scots were determined to widen the gap. After recovering a fumble by Independence, Kuhn earned his second touchdown, completing a ten-yard pass by Netane.

By this point the Screaming Scots were having the time of their lives as face-painted students chanted, “I believe that we will win!” over and over, celebrating their 21-0 lead.

Just before the Scots could walk away with a shutout quarter, the 76ers slipped through a gap in Carlmont’s defense, scoring their first touchdown of the night.

However, despite the occasional gaps in their defense, defensive guard Steven Talaina believed in his team.

“I just had to be confident in myself and in my teammates,” Talaina said. “I mean we didn’t start as strong as we could have, but when the quarters kept going, we kept getting better and better. We kept sealing our blocks and I think that’s what got us ahead.”

As Kuhn earned the fifth touchdown of the night, rushing 65 yards, the gap widened even further, bringing the score to 40-7.

With just four minutes to go in the second quarter, the 76ers struck again as they completed a pass to earn their second touchdown of the night.

After performances by the Carlmont cheer and dance teams, the Scots returned to the field with offensive plays that mirrored previous quarters. Once again, Kuhn started the quarter with a touchdown after completing a 20-yard pass from Netane.

And while 76ers earned their third touchdown, the Scots were able to seal their blocks so that no further points could be scored.

Despite their loss, Singh walked away with his teammates knowing that they had done their best.

“We just fought till the game ended. I mean you guys did win, but it was a good game overall,” Singh said. “Next time we see you guys hopefully it’ll be a better outcome.”

The Scots, on the other hand, walked away with confidence and will be facing off against the Palo Alto Vikings later this week.