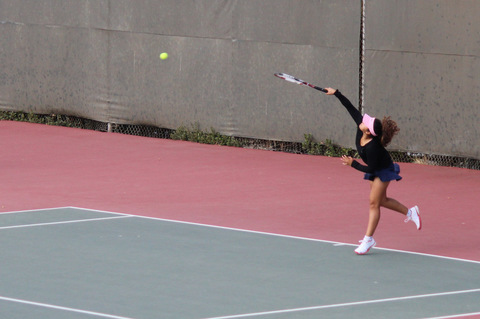 Carlmont senior Mar Burgueno serves the ball in her match.

Carlmont girls tennis beat San Mateo High School 4-3 on Thursday, Oct. 14 to earn an important win in their race for a playoff spot.

San Mateo Coach Ed Schumler said, “Today’s match is important. This is our second time playing them. We’re trying to make the playoffs again this year.”

Both teams have been steadily improving this year, and are trying to be in form for the end of the season.

Carlmont doubles pair of junior Jessica Ma and freshman Sakina Bambot beat San Mateo in a match that went to three sets. San Mateo won the first set 7-5, while the next set went to Carlmont with a score of 7-5. The final set went to a tiebreaker with Carlmont coming out with the win.

This was the close and deciding match that gave Carlmont the win. This win negates Carlmont’s earlier loss to San Mateo.

“This season we’ve been playing aggressively and hard in our games. We’ve also been giving the young players a chance in the top matches,” said Carlmont coach Amina Halsey.

Carlmont has been giving some younger players chances this year, as they have 11 seniors on the roster.

“We’ve reformed well this season and we’re trying to improve our play as we reach the end of the season,” said Halsey.