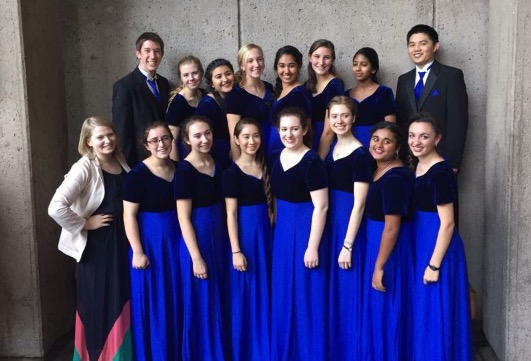 Through months of preparation and learning, 15 singers from Carlmont choirs performed in California’s Coastal Honor Choir on Nov. 21.

California’s Coastal Honor Choir is an advanced choral experience for high school singers along the coast of California. Carlmont was one of two most represented schools at the event.

Through an extensive audition process, 15 of Carlmont’s students were chosen to participate.

The auditions were held in seven different locations along the coast of California for a two day period in the middle of September. Results from the auditions were announced a week later, and sparked the music learning process for Carlmont’s chosen few.

After almost two months of preparation, all accepted singers into California’s Coastal Honor Choir met in Palo Alto on Nov. 19. Over a two-day period of time, singers had the opportunity to work with University-level directors and grow as vocalists, while preparing for their upcoming concert on Nov. 21.

Senior Jasmine Davidson said, “At each rehearsal we worked with each piece minutely to make it come alive. Once notes and rhythms were in place, we tried using different phrasing, dynamics, tone, vowels, and other stylistic techniques to enhance it.”

During the rehearsal process, Carlmont students seemed to take a leadership role among their peers.

Sophomore Clara Butler said, “When our director asked for volunteers to lead the choir in a vocal exercise, three Carlmont kids raised their hands. We were chosen and had to get up in front of our peers and lead them in a scales warm-up. It was nerve-racking, but a lot of fun at the same time.”

In addition to taking a strong leadership role, Carlmont had three soloists featured in the final concert out of a total of seven opportunities for solos.

Among the featured soloists, junior Snehal Pandey said, “It was an incredible opportunity to be chosen for a solo out of all the amazing singers I was surrounded by. I had a lot of fun with it, and I’m thankful I had that experience.”

The experience of performing with advanced singers from all along the coast and learning from well-renowned directors was one that Genevieve Tep, Director of Carlmont Choirs, wished for her students to have.

Tep said, “I want my students to develop a passion for music that will hopefully lead them to continue singing in college, and throughout the rest of their lives. By working with University Directors, my students developed an even better appreciation for music than I could ever give them.”