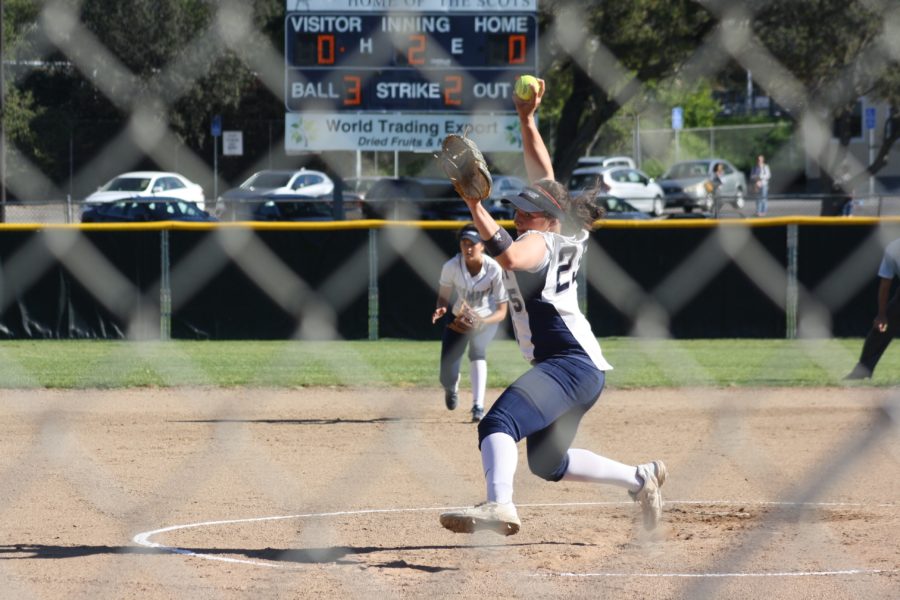 Mailey McLemore, a junior, carries her team through a tough win, a two-hit game, in her pitching performance on March 14 against the Homestead Mustangs.

The victory was led by a strong pitching performance by Mailey McLemore, a junior. A few hits late in the game and errors committed by the Homestead defense put runs on the board that McLemore and her defense defended.

“This was a much tighter game than ones we have been playing in the past which was good because we’ve been blowing some teams out lately,” said coach Marco Giuliacci.

This is the team’s seventh win in the 2016-2017 season. The Scots suffered a heartbreaking defeat to San Benito high school in the CCS finals last year. This year, they are focusing their season in preparation for playing in that game.

“The league season starts next week,” said Giuliacci. “League is really important because it catapults us into CCS, and that’s where we want to be.”

The game was a pitcher’s dual. McLemore faced off against the pitcher from Homestead, both of whom were playing their best. The first four innings saw the two pitchers dominating the line-ups of both sides.

The bottom of the fifth inning was a different story, where an error by the Homestead pitcher put Abygail Lan, a junior, on first base. Sydney Adair, a junior, would run for Lan. Adair was advanced to second when Jamie Madigan, a senior, reached first base on an error by the third baseman.

They would score the first off of an error committed by the catcher after a throw down to third base skipped under the glove of the third baseman. Adair had feigned stealing third, and after the throw got past, raced down to third. The play did not end there because the ball rolled under the glove of the left fielder, who came into back up the play. Adair would score with Madigan ending on third.

Madigan would score on the next play when Sophomore Kate Berce hit a sacrifice fly to right field for a RBI, a Run Batted In. Those two runs would be the only runs scored for both sides.

On the defensive side, McLemore had seven strikeouts and gave up just two hits.

“It was nice knowing I had my defense behind me,” said McLemore. “Our catcher did a really good job today, and she definitely helped me out a lot.”

This game was different than past games played by Carlmont. The Scots won by two runs, but they have won previous games by deficits over ten runs.

Carlmont goes into their league season in their next game against Saint Ignatius.

“We’ll work towards the league season this week since that is so important to our eventual entry into CCS,” said Giuliacci.