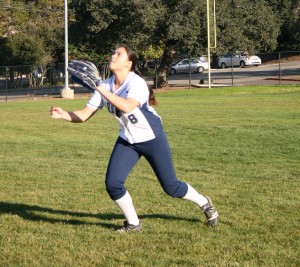 Carlmont’s varsity softball continued their hot start into league play with victories over Burlingame and Aragon this week.

On Monday, Mar. 28, the Lady Scots traveled to Burlingame with their hopes set on improving to 2-0 in league play. Rebecca Faulkner, a freshman softball player, was the starting pitcher, and made it through the whole game allowing just one run.

On the offensive side of the ball, Carlmont’s junior player Kelly Robinson led the way, hitting 2 for 4 with two RBIs and two runs. Gabriella Pons, a freshman player, also contributed with two RBIs to her name.

This 9-1 win propelled the Lady Scots to a 2-0 league record, and prepared them for their game the following day versus Aragon.

Carlmont got off to a quick 2-0 lead, but Aragon fired back with a three-run home run off Giuliacci in the 4th inning that changed momentum. However, the Lady Scots rallied in the sixth to tie the game and send it to extra innings.

In the seventh, Amelia Gerolimatos, a Carlmont senior player, knocked in the game-winning run on her second hit of the day, keeping Carlmont atop the division standings.

The Lady Scots will play their third game of the week against Mills on Thursday, and look to finish off the week at 4-0 in league play.