Carlmont students can lend a voice 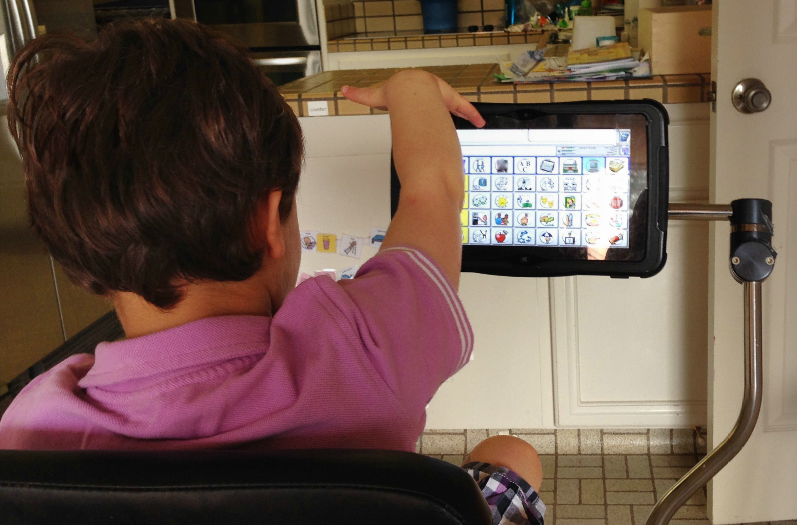 Jack communicates using his current AAC device, which costs around $9000. VocaliD estimates that voices will cost only $1249, making them significantly more affordable.

When 7-year-old Jack tries to speak, he can’t make the words come out.

Jack was born with a rare genetic disorder called ornithine transcarbamylase (OTC) deficiency. As a result, he suffered hyperammonemia immediately after his birth. This ultimately caused neurological insults [acquired brain injury] that resulted in hypotonia and apraxia, a lack of coordination of muscle movement. This makes simple actions such as chewing, swallowing, and speaking difficult for Jack.

According to the American Speech-Language-Hearing Association (ASHA), approximately 2 million Americans rely on augmentative and alternative communication (AAC), or “an area of clinical practice that attempts to compensate (either temporarily or permanently) for the impairment and disability patterns of individuals with severe expressive communication disorders.”

For Jack, this means using a “talker” — a device that reads aloud whatever message Jack composes on screen.

Jack’s computer-generated “voice” resembles that of renowned physicist Stephen Hawking. While this system works at home with Jennifer, this artificial voice has created some complications in other areas of Jack’s life.

“He’s had peers say negative things about how his voice sounds,” said Jennifer. “Kids just want to blend in and be normal. If it didn’t sound so robotic, he might not feel so stigmatized by it. Maybe he would be more willing to communicate.”

After years of using an AAC device that was far from perfect, Jack now has a chance to dramatically improve the way he communicates through an organization called VocaliD.

Rupal Ratel, professor at Northeastern University and founder of VocaliD, said, “People have different voices, even if they’re nonspeaking. VocaliD has developed techniques to blend two ‘voices’ together, [a non-speaking] recipient’s source with a donor’s filter.”

Ever since giving a TED talk in late 2013 entitled “Synthetic voices, as unique as fingerprints,” Patel has worked toward funding the development of more natural-sounding voices for AAC users.

Patel said, “It all started back in 2002, when I saw a little girl and a man having a conversation using the same voice. These voices were not representative of the speakers, not an extension of them, as a voice should be.”

The startup campaign culminated with a successful web-based Indiegogo fundraiser in June, which was 172 percent funded by the time it closed.

In a matter of months, the first few “trailblazer” recipients will have their new custom voices, and many more will move away from mechanical or pre-recorded voices toward a more personalized alternative to traditional communication.

In addition to the custom nature of the voice, another revolutionary aspect is the cost.

Because VocaliD utilizes volunteer voice donors, is very affordable when compared to other AAC devices. The current estimated cost of each VocaliD voice is around $1249.

“It costs VocaliD money to save and store people’s voices, so we need people to send the most high-quality recordings, not just care about getting through the task,” said Patel. This way, even more savings can be passed on to the voice recipients.

Those who wish to donate their time and voices to VocaliD’s Human Voicebank can make an account on VocaliD.co and record a complete set of 3500 sentences. The website is compatible with Google Chrome and requires a quiet recording environment to ensure quality voice donations.

After contributing to the Human Voicebank, donors will receive a certificate for seven hours of community service. More importantly, donors could change the lives of those like Jack.

Jennifer said, “I hope that [this new voice] will make Jack more comfortable using his device, and that his peers will find it more approachable.”

Carlmont will be hosting a VocaliD “Voicedrive” for all who are interested in making a difference and helping everyone find their voice. Signups will continue through early November, and people can join the Facebook group or talk to math teacher Andrew Ramroth to get involved.

Participant Tessa Bagby said, “Our voices are such an important part of who we are. I really like the idea of VocaliD and the Voicedrive because it’s a way for people with voices to give others a chance at their own unique voice.”