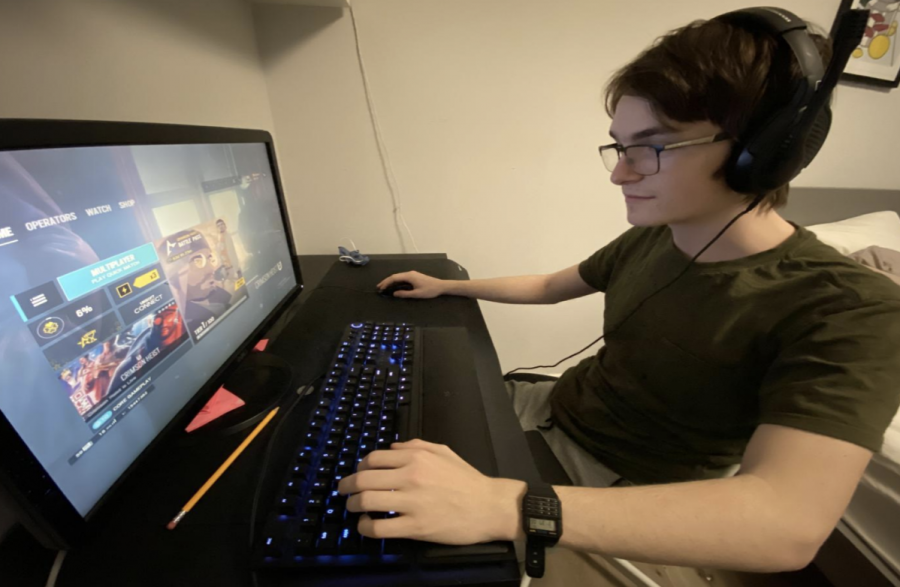 Sophomore Oliver Richards queues up to join a competitive R6 match. In order to practice for their games, Zesty Boi’s members play rigorous matches to ensure that they are prepared for their tournaments.

As the winter season for the High School Esports League (HSEL) came to an end, Carlmont’s Rainbow Six Siege (R6) team showed off their hard work in the finals, ultimately placing second. With the recent growth of esports comes the increased participation and competition between high schools.

This year was the second season the student’s R6 team, “Zesty Bois,” participated in the HSEL tournament. In their first season, they placed 5th. Currently, the students play as free agents but affiliate with Carlmont’s eSports Club. Along with the R6 team, the students have Valorant and Rocket League rosters, who placed in the top 8th and 16th in the league, respectively. They plan to increase the availability of games they play to the Madden NFL, FIFA, and NBA 2k series to accommodate the influx of players wishing to compete.

“There would be a time to write strategies, and then we would work to implement them by scrimmaging various teams,” sophomore and Zesty Boi’s member Ayush Agrawal said. “As well as this, we would watch two-to-three-hour videos of our opponents’ games and analyze to figure out their playstyle and how we can beat them.”

While it’s essential to commemorate a finalist team’s successes, it’s vital to understand how they got to the finals. Agrawal spoke of many methods that their team would use to practice for their games, such as reviewing opponents’ videos, creating strategies, and more. By understanding how their opponents play, the Zesty Boi members can develop their tactics to stay one step ahead of the competition.

This occurs while maintaining a balance with all of their schoolwork and extracurricular activities. Participating in the HSEL tournament is a massive commitment and targets those who wish to strive in the competitive high school gaming scene.

“My experience with HSEL has had its ups and downs,” said Zesty Boi’s captain and eSports Club vice president Jake Generalis. “While the actual activity of playing the game is excellent, the support staff is often limited and lacks communication. I’ve had my fair amount of problems throughout the whole season regarding the support team.”

While Generalis has found great success with leading his team to a finalist position, he has encountered both positives and negatives with the HSEL administration. Towards the beginning of the season, Generalis and his team missed out on playing the first game of the season because one of the players hadn’t been properly “verified” for HSEL. Upon further inspection, the member did verify themself, but the system failed to validate the process. HSEL took note of this, however, they refused to provide them with a rematch, putting them in a situation where they had to win every match to qualify for playoffs.

“I would say anyone joining the Carlmont eSports club should keep an open mind, as some of our best teams are composed of people who joined initially playing another game or with a different set of teammates and have since excelled in various positions within the club,” said senior and eSports Club President Stephen Abbas.