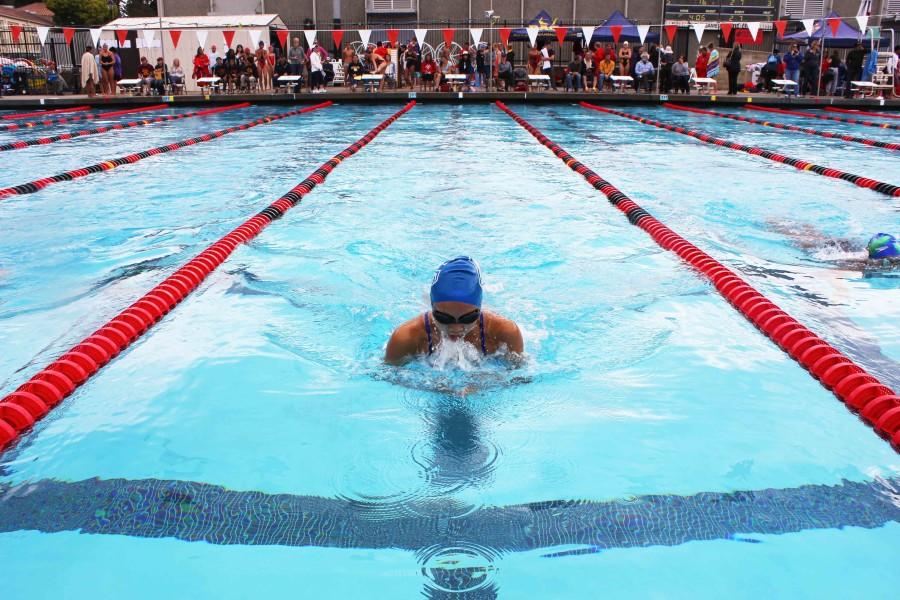 The Peninsula Athletic League (PAL) preliminary swim meet was held on May 6 and 7 at Burlingame High School.

Composing the Bay Division of PAL are high schools Aragon, Burlingame, Carlmont, Menlo-Atherton, Mills, Sequoia, and Terra Nova. All seven teams hoped to break records and advance onto the final meet held on May 9.

Despite the chaos of the preliminary round, swimmers from all grade levels performed well. Both new and returning Carlmont swimmers pushed themselves and broke personal records (PR) by several seconds.

“I’m really happy that I got a PR on my 100 Breast event by two seconds,” said freshman Tiffany Chung. “Now I have a four-second lead on the second place swimmer, which feels awesome.”

Senior Elise Dimick said, “I got a PR in in my 50 Free event and a PR in my 100 Back event. I took one second off my 50 Free and two seconds off my 100 Back… I was determined to push through and have the best races I’ve had all season. When I enter the pool with confidence and motivation, I seem to perform significantly better.”

“I feel that in both my events I got pretty good preliminary times. My 200 Free was my season best. My 100 Free was a little off, but I’m looking to drop a lot of time in the finals and I’m confident that I can,” said senior Nico Camerino. “I think I set myself up in a good position to win both of my events.”

Despite their victories, each individual swimmer struggled in the races.

“[As a new swimmer] in the beginning, Kelly places us in different events because we don’t know what we’re good at,” said Chung. “Backstroke is not my best stroke, so the Individual Medley (IM) event was harder for me.”

“I didn’t perform as well as I’d hoped to in the 100 Free event. I felt physically exhausted very quickly and struggled to keep up with the person in front of me while preventing the person behind me from passing,” said sophomore Enzo Llorach. “I didn’t break a PR but I’m hoping to get one this weekend in the finals.”

“The one thing with racing is that it’s never easy, and if it is, you could be going faster,” said Dimick. “I’ve struggled with staying strong throughout the entirety of my race despite the pain.”

Camerino said, “This year, I’ve been struggling with my front half speed… I haven’t been able to go out as fast as I want and it’s something I’ve been working on.”

Both the junior varsity (JV) and varsity teams felt greater team spirit this season than in the past.

“I have loved my first season of Carlmont swim. Swimming does not always feel like a team sport, but with JV it is. For the first time this year, we had team lunches and spirit days for our meet days,” said Chung.

“My final season with Carlmont has been awesome,” said Camerino. “The entire team is great and we’ve been more of a team this year whereas in previous years it has felt more individual… I really enjoy that aspect of it.”

Carlmont swimmers will compete in the PAL finals on May 9.