Carlmont swim team starts their preseason with a splash 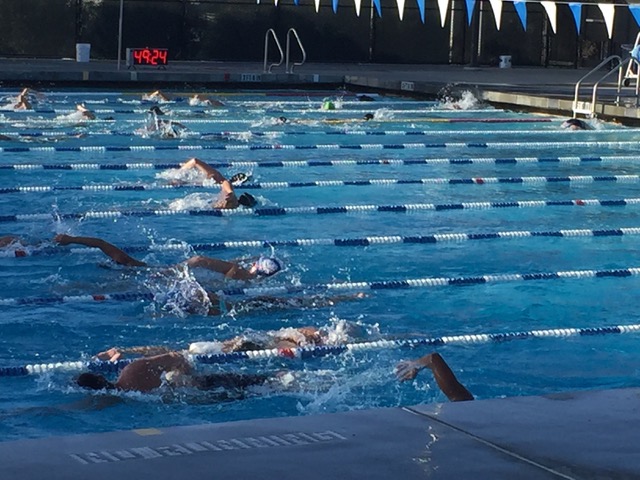 Carlmont swimmers practice under the trained eyes of their coach at practice on Feb. 16.

The Carlmont swim team began its preseason practices in order to prepare for their upcoming swim meets which start March 9.

The practices are structured to push the swimmers to be focused and determined.

The JV team has shown significant progress throughout the past year and are expected to perform better and better as the year progresses.

The teams this year have a desire to beat their times from last year and set new records.

“I think I’m going to improve a lot this year because the coaching is great and the drills are very useful,” said sophomore Patrick McDonough.

The practices start right after school and go until 5:30 p.m. Head coach Fred Farley has the full attention of his swimmers as he calls out each drill.

“We have high expectations. We finished really strong last season the boys won [Penninsula Athletic Leauge] PALs for the first time, and the girls were really strong. We’re kinda springboarding into the season and I think we are going to do equally as good,” said Farley.

The swimmers start with an individual warm up then after five or so minutes they turn their attention to Farley. Each drill is intended to improve the swimmers and their techniques. Some drills focus on different aspects of each stroke; for example, shark fin freestyle is intended to ensure swimmers bring their elbows up and out of the water with each stroke.

“[The coach] has introduced a couple new drills, but overall I know most of them and find them very useful,” said sophomore Karen Li. “I also have the same coach for my Carlmont and club teams so I know what to expect.”

The overall atmosphere of the pool is one filled with laughter and jokes. After each drill as the swimmer’s rest, the air is filled with the buzz of conversation and bursts of laughter. But once the coach starts the next set of drills they all fall silent as they turn their full attention to him and their determination to get better shows on each and every face.

“This year, like last year they’re into it. They’re a tight-knit group, they’ve got the spirit and have a good work ethic. We are going to continue on from last year and improve,” said Farley.

The swim team is expected to do very well this season and have the full confidence of their coach pushing them to higher and higher levels of accomplishment.

Every swimmer is excited to start the season as well as improve more and more with each stroke.