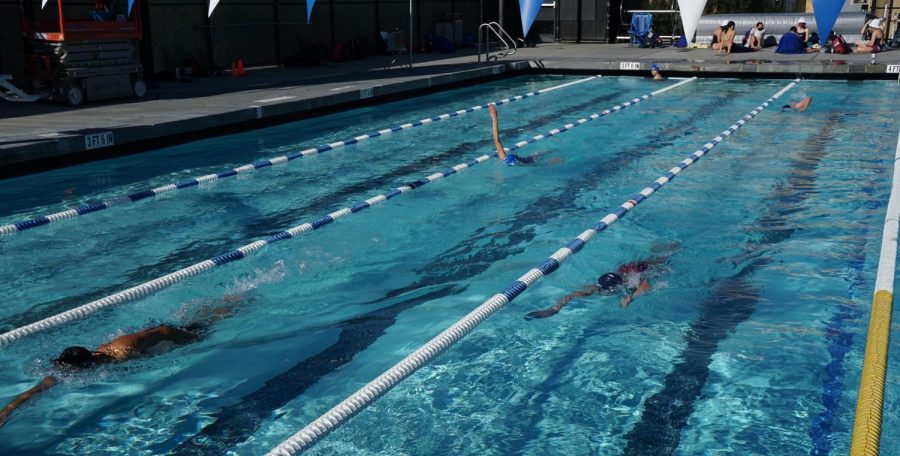 Carlmont swim warms up in preparation for their first meet of the 2021 season.

San Mateo County’s rapid decrease in COVID-19 cases has allowed Carlmont’s swimming season to kick off. Though safety procedures are still in question, athletes have returned to daily practices in hopes of competing in rescheduled in-person meets.

Still, the post-COVID-19 world warrants changes. Though the team continues to practice every week day with an optional practice on Saturdays, they have been shortened to one and a half hours instead of two.

Another significant change is the overall attendance of the Carlmont swim team members. With the prevalence of COVID-19, many swimmers opted out this season due to safety concerns, while others were forced to choose between swimming and water polo as their seasons coincided.

“Although I’m really excited for the new season, the team is so much smaller than last year. This year the team has reduced from 80 to 40, so the spirit just isn’t the same anymore,” said Katrin Lelyushkina, a sophomore on the team.

Team size and attendance aren’t the only things undergoing change. Large gatherings are still not permitted, so Carlmont’s swim team has adapted accordingly by holding swim meets virtually. Though the logistics and details are still in the works, virtual meets allow multiple schools to compete at the same meet and are perfect for limiting contact between schools.

To abide by COVID-19 restrictions, Carlmont swim team coaches have implemented many new rules and regulations. Like other sports, swimming has been divided into separate pods to limit contact between team members. One pod is comprised of varsity team members and another of JV members.

When swimmers arrive at practice, their temperature is taken, and they must complete a form regarding any possible COVID-19 symptoms. Swimmers are now only allowed two per swimming lane, and only one person is allowed on each side. With the twelve swimming lanes in the Scots’ pool, only 24 swim team members are allowed in each pod.

Despite the changes, there is a common excitement surging through Carlmont swim regarding seniors who will compete in their last swimming meets as a Scot this year.

“I’m both really excited and sad going into this season. It will be my last season with Carlmont swimming, so I’m really going to miss all of the camaraderie and friends I have made. However, I’m elated that we even get to have a season considering the circumstances,” said Kaitlin Leung, a senior on the team.

Such emotions are shared by Jim Kelly, head coach of the JV team and a teacher at Carlmont.

“I’m pumped. I love coaching so much, and just watching these athletes improve is exciting for me. I love being able to put the swimmers in the best possible position to win, and finally, I’m honored to be able to watch my daughter Jacey compete in her senior year. I’m a proud papa indeed,” Kelly said.

Regardless of the complications that COVID-19 adds, the competitiveness and familial bond that drives Carlmont swim remain the same. No matter what, Carlmont swim will continue to compete with an urgency to win and preserve its reputation as a winning team.

“[The team has] been working hard over the offseason, and we’ve all been practicing rigorously to keep in shape and prepare for the hopeful season ahead. As of now, I think our team as a whole is in a really good position,” Leung said.