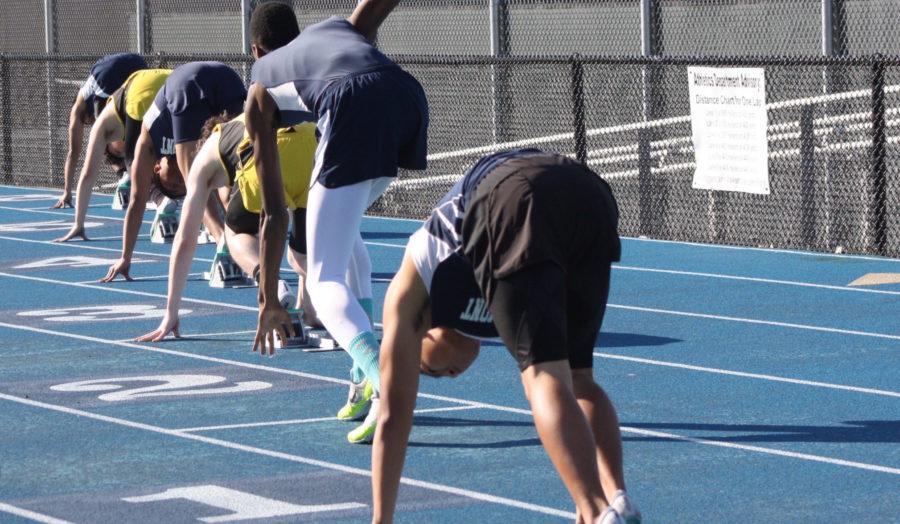 Carlmont varsity boys runners getting ready to race on April 19.

On Wednesday, April 19, the Scots faced off Terra Nova on a hot and sunny afternoon. Before the starting pistol shot off for the first event at 3:15, the girls 400-meter relay team nervously practiced their baton pass around the Carlmont track.

“I was nervous before my race,” said Kanadjian. “The baton pass is the hardest part to get down, and that’s what shaves seconds off your time.”

After vigorous practice, the 400-meter team performed even better than expected. They earned first place in their event and beat their personal record time of 52 seconds.

“When the gun fired off, I was worried that I would mess up our pass. I was nervous something would go wrong, but I think it was just the muscle memory that helped us out,” said Kanadjian. “I feel proud of the team, we worked well together during practice, and it ended up turning out well, so I’m very proud of us.”

Carlmont was consistently making good times throughout the events of the meet. Runners were excited and proud of their races.

One of the very few dissatisfied athletes was Niko Rodriguez. Due to a hamstring injury from a past meet, Rodriguez had to sit out of his usual 400-meter dash.

“It feels awkward not to be able to run. I’m always the one racing, and watching everybody else race is different,” said Rodriguez. “I want to get back out there soon.”

Even though Rodriguez is not able to race, he still supports his team by working on the hurdle crew, spectating, and cheering on his teammates.

Running the 100-meter dash up next was Simon Tara. Searching for improvement from his past meets, Tara dedicated a lot of time to practice and training.

“To prepare for my race, I practiced and put in a lot of hard work everyday to try to come in at first,” said Tara.

And he did just that. Tara earned first place in the 100-meter race and was well pleased about his scoring.

“I feel that I have improved from the last race to this race a lot, and I’m looking forward to improving even more,” said Tara.

Shotput and Discus coach Al Schmidt never doubted the Scots. Schmidt has been coaching the Scots’ track and field team for 18 years now and reflecting on past meets, Schmidt put a lot of confidence in Carlmont’s team.

“I was not worried at all for Carlmont. We have a pretty strong team,” said Schmidt. “I remember when we went to meet Hillsdale and I felt embarrassed for them because Carlmont just beat them like crazy. So I have a lot of confidence in them.”

Jumping and Sprints coach Jonathan Gray also was impressed by the Scots’ success in their meets so far.

“The meet was well run; I am very impressed by everybody. Everyone did a wonderful job, and I’m proud of these guys. So far we haven’t lost a meet,” said Gray.

In contrast to Schmidt, it is Gray’s first year of coaching track and field. Gray is very committed to the Scots because he also ran track for Carlmont for four years until he graduated in 2016.

The Scots finished the meet with a total score of 270 beating Terra Nova’s score of 233.

“When we finish, everyone has pretty well done their best,” says Schmidt.