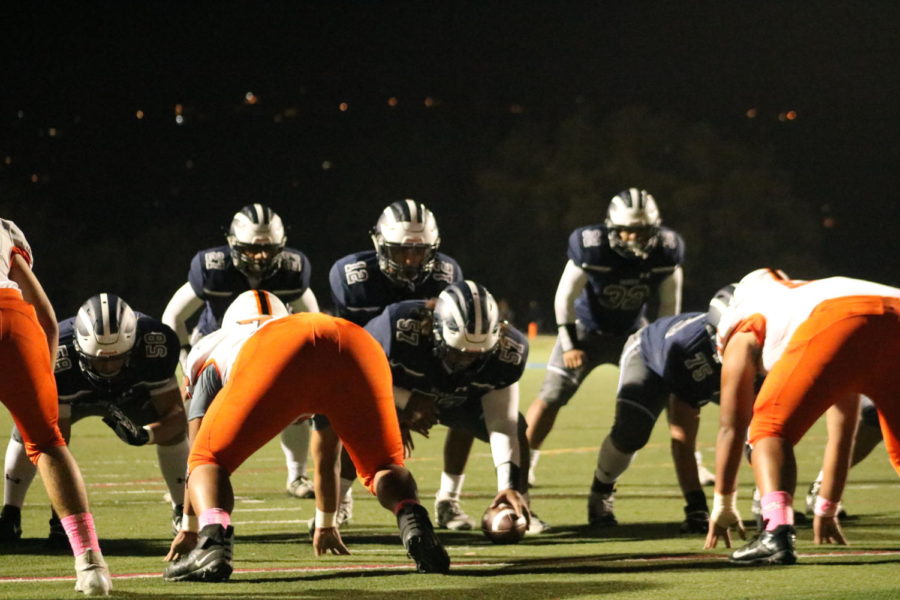 Carlmont's offensive sets up to score a touchdown.

In their head-to-head game against San Mateo, Carlmont varsity football lost during overtime in just a matter of seconds.

Coming into this game, the Scots knew that San Mateo was an ever-improving team and would be a tough competitor.

Quarterback Tim Netane said, “Lately San Mateo’s program has been rising. They are a pretty good team, and today they showed that they are a strong team.”

In the first few minutes of the first quarter, the Bearcats scored a touchdown, taking the lead 7-0. However, the Scots kept their defense up and didn’t let San Mateo score any more points.

In the second quarter, San Mateo scored another touchdown, but Carlmont still didn’t lose hope. Bringing them back into the game, sophomore Dane Fifita, one of the Scots’ running and defensive backs, scored the team’s first touchdown of the night. At the end of the first half, the Scots had a fighting chance to take home a victory with a score of 14-7.

Just one more touchdown and the Scots and Bearcats would be tied.

Team captain Jonaven Kuhn started the fourth quarter with a critical touchdown, tying the score to 21-21. The team roared with excitement; this could be their game break to playoffs.

Both teams desperately tried to score the winning point without letting their guard down. Neither team managed to score, making the game go into overtime.

Head varsity coach Jake Messina said, “Unfortunately, I’m not very smart, and I called a really bad play at the end [during overtime], costing us the game.”

San Mateo pulled through and scored a touchdown, defeating Carlmont 27-21.

Despite losing the game, the Scots were still proud of their performance and will continue to play their hardest in their future games.

Not only were the players proud of their performance, but Messina was too.

Messina said, “They did a phenomenal job and did everything they needed to do to win.”

Although the team played well, this was a tough loss because if they had won this game, they would have had a genuine opportunity to go to the playoffs.

The Scots aim to play harder than ever in their future games to ensure a spot in the playoffs.