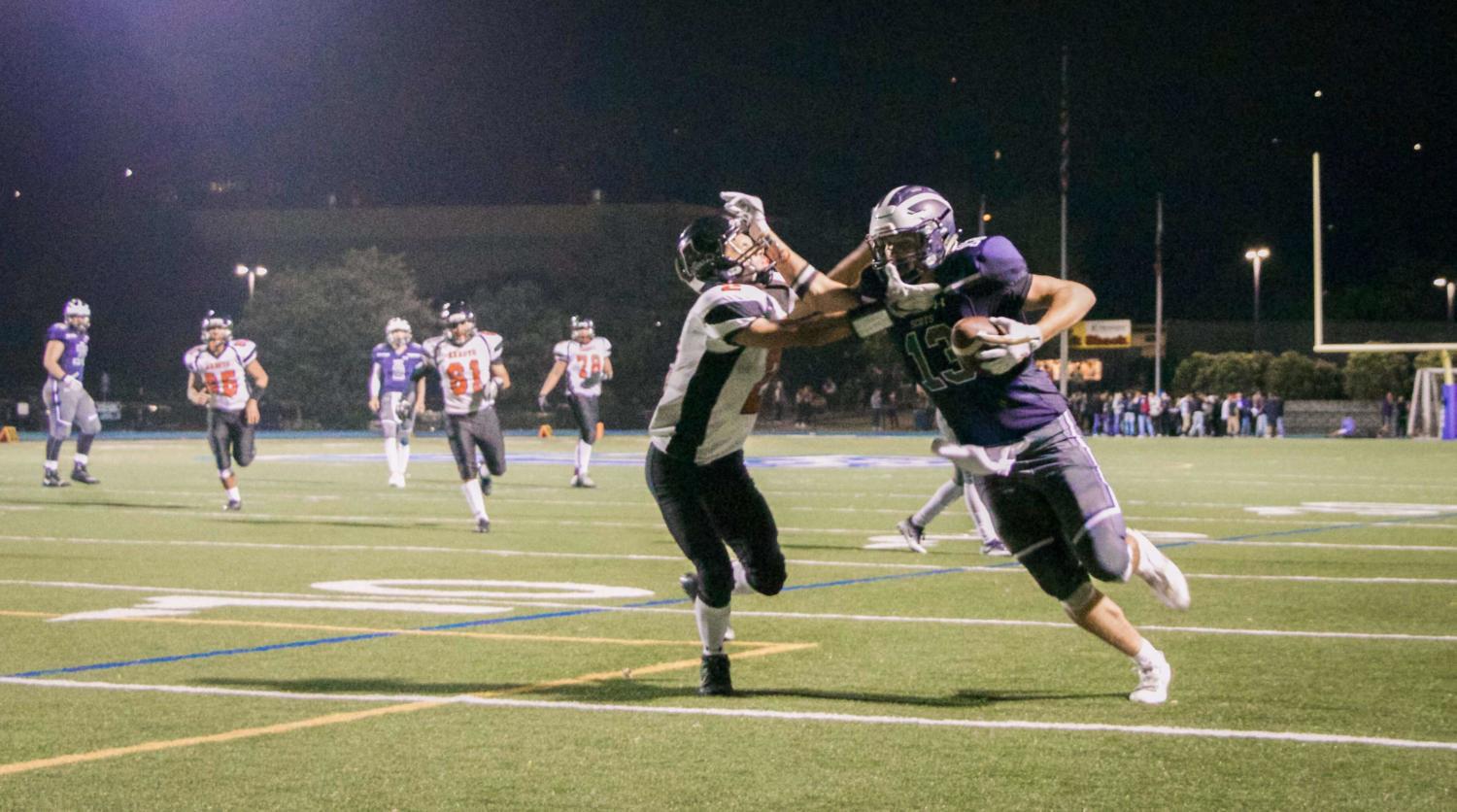 On his second touchdown of the night, senior Jason Lloyd runs the ball down the sideline with a defensive player by his side.

Even before the whistle blew, the Scots had decided they were not going to leave the field without a fight.

This mentality translated directly into the game, as the Carlmont varsity football team defeated the Arroyo Dons 49-6 in their first game of the season on Aug. 25.

Both teams tried to assert their dominance at the start of the game, and Carlmont showed that aggression by running the ball down the sidelines. Just seven minutes into the first quarter, running back and senior Demarii Blanks did exactly that and made it to the end zone. But the play was reversed as one of the referees flagged the play due to blocking in the back by one of the Carlmont players.

However, this did not stop Blanks. Less than one minute later, Blanks took another attempt along the right sideline and scored a touchdown, followed by an extra point kick from Henry Reich, a senior.

The Dons struggled to compete with the Scots’ tackles and defensive line. This is evidenced by the slow reaction times by Arroyo quarterback Abraham Villavicencio who was sacked by senior Jason Lloyd four times.

“I told our team coming in that Carlmont was one of the better teams in the Bay Area. It’s their year. We are rebuilding. And I told our players it was going to be a handful. It was exactly what we expected,” said Kurt Bryan, head coach of Arroyo varsity football.

With high spirits and energy, the Scots continued their lead with a receiving touchdown by Lloyd thrown by senior Timmy Palthe at the 20-yard line. Reich followed up by successfully kicking the extra point, bringing the Scots to a lead of 14-0.

Lloyd scores his final touchdown of the night.

The confidence developed in the first quarter persisted with the Scots throughout the rest of the game.

“Confidence was a big part. We said before the game that we’ve worked too hard and done so much to be in the position we are today, so let’s play like it,” said Blanks.

Early in the second quarter, Arroyo attempted to score a touchdown, but Blanks made a diving interception in the end zone. Two plays later he ran the ball 89 yards for a touchdown. The second quarter also encompassed junior Julian Morin’s 53-yard touchdown with the help of strong downfield blocking from seniors Anthony Arteaga and Dom Susa along with James Ferrario, a junior. These crucial defensive stops were pivotal to the Scots securing the victory.

The Scots continued to display their rigor in the second half.

“It was 42-0 Carlmont going into the second half, so everyone got a chance to get in the game and make some plays. We did up getting into the end zone one more time on an amazing run by Jonaven Kuhn. Arroyo was able to score on the last play of the game, but it was far too late and we got the win,” said Palthe.

Blanks completed two touchdowns, followed by two each for Lloyd and Morin, helping the Scots to a 49-6 win over Arroyo.

Many new players also affirmed their place in the team. In his first varsity game, Morin rushed over 100 yards in addition to his two touchdowns.

Despite a huge defeat, Arroyo is not too different from where Carlmont was over two years ago.

“We graduated most of our seniors last year and the new staff took over this year. Arroyo only has won seven games in the last four years, so we are working hard,” Bryan said.

Since Jake Messina has taken over the Carlmont football program, significant improvement can be seen in the way the team communicates with each other, handles the ball, and executes plays.

“We had a great offseason in the weight room. There was a lot of dedication. We are way more physical and faster now. When we play someone that is physical and big, I think we will now be able to match that,” said Messina.

For some players, this is the start of their last high school football season. However, this does not have to be the end of their football careers. Lloyd has received a Division 1 full scholarship offer from the Air Force Academy.

THANK YOU GOD???? I am blessed and excited to say that I have received my first offer to AIR FORCE!??? @KTPrepElite pic.twitter.com/7R7FgO9xIE

The Scots will be playing away versus Woodside High School on Sept. 1.

“I am looking forward to the intensity and competition next week against Woodside, but we got something in store for them,” Blanks said.